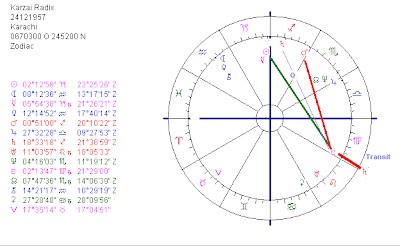 Hamid Karzai was born 24th December 1957 and on that specific day you see the aspect of the survivor: Sun trine Pluto. Why is it an aspect for surviving? I think maybe because Pluto is the symbol of defense, protection (guards!) and being on guard with a certain strategy. Sun-Pluto aspects are frequent in the charts of coaches (football) who want to (Sun) win (Pluto) and are (Sun) an authority - in their field - (Pluto). Another component of the lives of coaches is the intensity (constant stress: when others fail to win, they lose the job).
This aspect does not protect you from dying young. Grace Kelly (Princess Gracia, 12111929 053100 EST Philadelphia) died rather young, with the same aspect, due to a crash after brain damage. So maybe Sun trine Pluto just provides you will all the force and strength that you most certainly will need?

Anyway, back to Karzai, Sun trine Pluto is the most tight aspect in his chart! Combine this with the oriental Saturn and you see a 'die hard' combination for hard confrontations and the disadvantages (Saturn) of politics (Pluto).

With Mars square Pluto having to defend yourself and the theme of use and abuse of power is evident in his life. Notice that Saturn is 106 degrees away from Pluto (a quindecile is 105 degrees)...Mars-Saturn-Pluto...

It is so easy to see why an attempt to kill him by force was made yesterday. Transit Saturn is now square Mars and conjunct Pluto, but also trine Sun. Transit Mars is inconjunct progressed Sun and Saturn. You see the theme of the danger (Pluto) to die (Mars-Saturn) - the theme of unnatural death cause - being mentioned twice! And it is confirming a combination that we see in his birth chart.