IN MEMORY OF MARTIN LUTHER KING
who died 4th April 1968

Today, 40 years ago, Martin Luther King was murdered. He was born January 15, 1929 at about 12 (noon, really, A-rating Astrodatabank) in Atlanta. On the 28th August 1963 he said he had a dream and that was with transit Neptune (symbol of ideals and dreams) opposition his ascendant.

He died April 4, 1968 at 18:01 EST in Memphis. The killer was James Earl Ray, born May 10, 1929 in Alton, Illinois. He had Mars 'calling' (not making any major aspect in sign, signifying agression and action at any possible level) and he had that Mars inconjunct Saturn. That prominent Mars of James Earl Ray was spot on the IC (symbol of life ending) in the chart of ML King... 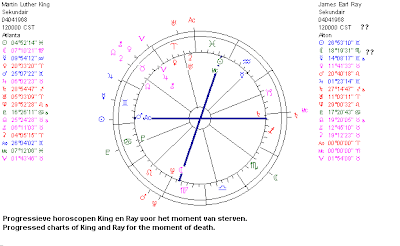 The progressed Ascendant of Martin Luther King was at 26d04 Gemini, with progressed Mars at 25d07. We may assume that Mars was actually conjunct the Ascendant or right in between the aspect with Mars and Saturn (combination of death) at 27d01. Notice that Saturn rules the eight house of death in the progressed chart and is in the natal eigth house of death. In the birth chart Saturn is semi sextile the Sun.

ASTRO I.D.
Martin Luther King was of course more than his death. But in his chart (here below) you see the importance of it. Saturn (in eight) is rising before the Sun, pointing at a certain orientation (influence of the parents, hierarchy, management etc.). But the Sun is the most important object in his chart. The Sun is conjunct the MC and 'calling'. This indicates crucial leadership at any possible level. Ten combinations of midpoints show the level of succes.

But there is more...Uranus is also 'calling'. And that completes the theme of limtited freedom and the resistance (Saturn-Uranus). . 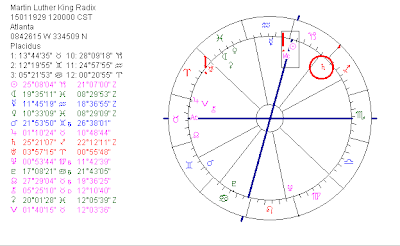