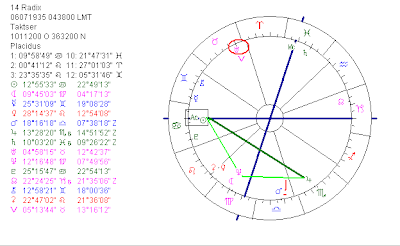 Mars, the planet of war and attacks, is on the birthday chart of Dalai Lama number 14 (born July 6 1935 at sunrise in Taktser, according to Astrodatabank). He is the spiritual leader of Tibet and Tibet is strugling for freedom right now. So that fits? I wonder. I have seen many places of birth and many hours, too, for the chart of the Dalai Lama. One is that of Chinghai, 16h22m36s GMT (so in the evening; source is my computer program Astrolab - ILH-4) and another one (Astrology Weekly) tells us that he is born in Tengster (could be Taktser, same coordinates) at 11:45 Local Meridian Time (about 5 a.m. GMT). Star IQ names 4:38 a.m., Tengstar (...) and Astrothème 4:38 AM Tengster Village. So let us agree whit sunrise in a place 101d12 North and 36d32 East in Tibet. I think, however, that this might be a manipulated birth time, just to get 'LEADER' in capitals (Sun conjunct Ascendant). À true spiritual leader, because the Sun is trine Jupiter and sextile Neptune (ruler MC). And a respected one: Sun trine Saturn. Abstination of female company and being taken away from his mother and family so young: Moon conjunct Neptune and opposition Saturn.

And we see a 'calling' Mars: a call for action. Uranus is oriental (one of the helping symbols for getting old). We see Mars and Uranus prominent for freedom fighter.

Now this Dalai Lama certainly isnot the kind of man to sit and wait. China accuses him of leading the protests against the occupation of Tibet by China. Tibet is completely different from China and one might wonder what the Chinese are doing there. I don't know, all I know is that the world accepts it.

With an MC in Pisces spiritual goals are on his way and as Mercury is the end dispositor of the MC-routing communicating is his 'ambition'. He knows his languages! We also see Saturn in the ninth house for the heavy load that conviction and religion lays upon him. I often point at the combination Jupiter-Neptune for religion. This time I like to point at Sun tightly square the midpoint Jupiter/Neptune, confirmed by Jupiter square Sun/Neptune and Neptune conjunct Sun/Jupiter. His day of birth was thé day for the birth of spiritual persons.

Will his country ever be free? I doubt it. But there is one good sign. On his birthday the solar return (4th July 2008, 13h15 GMT for Taktser, he lives in India, close to Tibet, in Dharamsala,) Venus instead of Mars is on the descendant. And Venus is for peace.
Geplaatst door Astromarkt op 2:44 PM