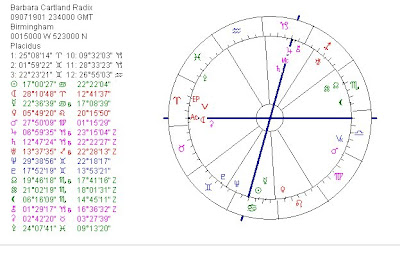 - Mercury is calling (no Ptolemeic aspects in sign and orb 5 degrees)
So that she has a vocation for writing!
- Jupiter is conjunct the MC
So that she has succes and her social position is getting better and better
- Moon is 'crucial' on the ascendant
Experiences, women and memories are of crucial importance and so is being popular.
- Neptune is oriental in her chart
So that she is oriented at the idealistic items in life (romance, for exampel)

The most prominent symbols in her chart are Mercury, Jupiter, Moon and Neptune and it is easy to see the combinations for having a great fantasy and succes with 'stories' and 'marvels'. The tightest major aspect is Moon sextile Neptune (for a need for romance). With all that she certainly was not blind for business, imago and status (Saturn on the MC!)

DIANA
Barbara Cartlandá daughter*) married the father of the late princes Diana in 1976. In the '70ies and '80ies she was a VIP. The year 1970 started with the progressed Midheaven trine Sun and later square Pluto.

RELEVANT:
About missing elements and not aspected planets

*)it was not Barbara herself like I wrote before. Thanks for pointing it!:)
Geplaatst door Astromarkt op 10:39 PM