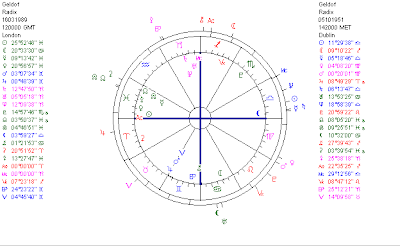 Life has not been easy in the eyes of Peaches Geldof, lately. She has Saturn conjunct Neptune in the 13th degree of Capricorn and both quintile the natal Sun. About 2-3 years ago there was a square between Sun and Saturn-Neptune. That is maybe when the problems started. With her Sun in Pisces and Moon in Cancer and with 50% of her placements in water signs she hardly can resist the party scene and she will easily give in to bad habits. Her Saturn-Neptune-connection is BTW square her father's Sun (conjunct Saturn/Neptune) and Uranus.

JUPITER for help?
Peaches Geldof's friend saved her life when she almost died due to an overdose, yesterday. That was with Jupiter square progressed Sun, Mercury and Venus and inconjunct progressed Mars. Her progressed Sun is getting closer to a semi square with Jupiter. Sometimes when there is intervention to be grateful for, coming from an advisor, a friend, a doctor or the law, Jupiter is there. And Peaches has reasons to be grateful.

BTW With her progressed Sun conjunct progressed Venus it is not surprising that she had a debut modeling.
Geplaatst door Astromarkt op 6:37 PM