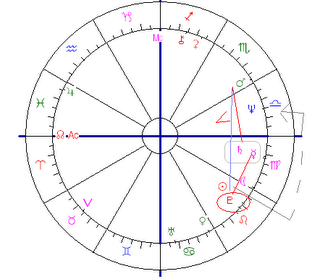 John Darwin is the name of the 'missing' canoer born August 14, 1950, who's case is right now being judged in court. His wife got the insurance money, but six years after his faked death, he reappeared. Even his kids did not know that the father was alive and well, but in financial trouble. You can read the full story in Times Online, with photo's of John and his wife Anne.

In the earlier post I said:
"Pluto is rising before the Sun and conjunct the Sun. Money, power and sexuality, cases of life and death...these are the main items in his life because of that prominent Pluto.

Notice that Mercury is conjunct Saturn and semi sextile Pluto: the key to a strategic mind*).

Mars semi square Saturn is often there in the charts of those who commit a crime or fight it. Darwin used to be a prison officer. Notice how the 75 degree quindecile aspect connects Mars and Pluto with Mercury-Saturn, connecting death with strategy."

I think it is very interesting that the symbol of Pluto is positioned on a spot that indicates that his issues come 'first of all'.

When he reappeared last year (December 1) he had progressed Sun conjunct Neptune. Neptune is always involved in scandals and secrets. Neptune is also imported in cases of missing people.

*) The strategic mind is almost always indicated in the charts of politicians. See the study of presidents on my site Astromarkt.