THE LITTLE BEAUTY QUEEN
Jonbenet Ramsey (6th August 1990 Atlanta 11:56) is the little beauty queen aged 6 who was murdered on December 26 1996. The family always said someone from outside the house and family must have done it. And though on the internet there is a lot of gossip going on about times and statements that do not correspond (like in the case of Madeleine McCann, again)...there never were real proofs against the family. 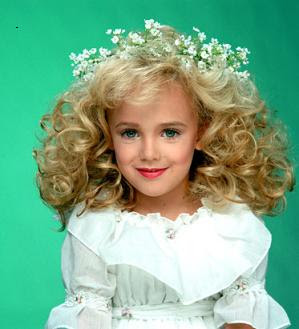 FAMILY
a. Father John Ramsey (7 december 1943, 12h45 Omaha) has Sun opposition Mars and Mars conjunct his crucial Uranus on the IC. Those are indications of someone with a hot temper. In October of 1996 he had Sun opposition Pluto and in January of the following year 1997 his Sun reached a sesqui square with Saturn. Neptune - the planet of the media - was on his progressed MC and so he was part of a gossip going around. Note that this is the same sort of aspect his little daughter had at the time! (see below...) Saturn was also in conflict with his progressed Ascendant and Venus. All these are very tough aspects that seem to match with the horrifying situation. 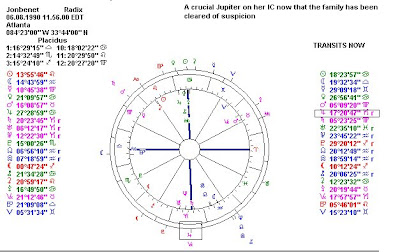 Jonbenet has an intruiging birth chart. This natal chart points at the disadvantages of beauty and charm and...at danger.

THE DAY SHE DIED - 26 december 1996 -
On the final day of her life Jonbenet had an appropiate transit of Neptune inconjunct the MC. She was missing for a few hours and her death has remained a mystery. She is sharing the Neptune-MC aspect with her father, that day.

In her solar return chart for 1996 Mars and Saturn take position on the cross of the chart: an end -Saturn - of energy - Mars -, a classical symbol of possible death in astrology.

One day a so called killer shows up: John Mark Karr (11th December 1964, Hamilton), a man with Mars tightly conjunct Pluto. He and the victim share the aspect of Mars and Pluto, the theme of use and abuse of violence. They were 'connected' by a violent act (but he did not do it).

He could have done it and so he was arrested.
John Mark Karr has the same connection between Sun, Mars and Uranus as John Ramsey. But...his DNA does not match and though the man is a pedophile, he did not seem to be the murderer and was released on October 5, 2006. Karr only was obsessed by Jonbenet...

TODAY
See how transit Jupiter is opposition her Midheaven. An appropiate aspect that is beneficial for her family.

Astrodatabank has a B rated chart now of 1:36!