BIRTH CHARTS JFK and OBAMA
And the Berlin speech...

The Berlin mayor, Klaus Wowereit, has given his permission, but Chancellar Angelika Merkel has reservations now that Barack Obama wants to speak at the Brandenburg Gate later this month, in the footsteps of John F. Kennedy ('I am a Berliner', he said, and that is a piece of cake, actually).

There is not much that the natal charts of John F. Kennedy and Barack Hussein Obama share. And when JFK was there, he was a president. Obama is not a president, yet. 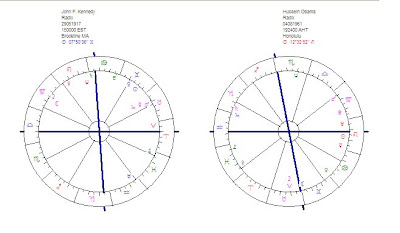 Here you see the charts of Kennedy and Obama.
Kennedy is first of all an international, a person who has the ability to discuss and convince the audience (Mercury, Mars and Jupiter are close together and rising before the Sun). His ambition (Saturn) is crucial (on the MC) for what he eventually will become and for the way he ends his life. See the oriental Jupiter square Uranus and sextiel MC, with Uranus inconjunct MC. In the chart of a politician Jupiter-Uranus points at being 'progressive' and 'democratic' or 'liberal', with the idea to make the world a better place.

Saturn of Obama is close to an opposition with the Midheaven of JFK. Instead of Jupiter-Uranus, Obama has Saturn-Uranus (Saturn inconjunct Uranus). So we might consider Uranus to be inconjunct the IC of JFK, too. I keep wondering what this particular aspect might indicate. A positive attitude towards the future (Jupiter-Uranus, JFK) and being scared of the future (Saturn-Uranus, Obama)? JFK wanted to make changes, Obama says he wants to change things. But why then that Saturn-Uranus conflict?


This is what Astrology Weekly says (in other words) about the aspect and it remarkably fits the news.... that with Saturn inconjunct Uranus.......

In a sense, you are locked up in the past, and that persons with this quincunx are trying to hold on to old concepts, desperately. "

The past, that is JFK and the Brandenburger Tor.

PS Today, July 14, Obama has said that he won't do a speech on that spot in Berlin, since he wants to be heard and he doesnot want to create controversies.