TRANSIT NEPTUNE AND SUN-NEPTUNE IN THE CHART OF RON WOOD

Ron Wood (Rolling Stones) left his wife for an 18-year old bar girl. And his friends say that he is drinking again and a lot...Neptune is the planet of addictions. Let us see where Neptune is in Ron Wood's chart. 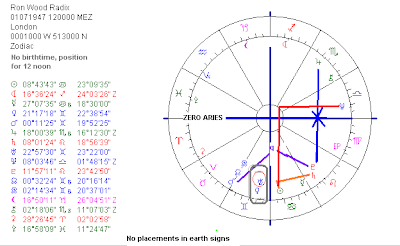 In the birth chart of Ron Wood (July 1, 1947, London) the Sun is tightly square Neptune (and semi sextile Saturn).
Right now transit Neptune is sesquisquare his natal Sun and Saturn.
So his friends might be right that Ron Wood, due to a tremendous amount of alcohol, is not himself lately, but they also might be wrong. The transit of Neptune simply highlights an existing problem that is indicated in the birth chart.

SUN-NEPTUNE
Of course his chart did not tell him to be an addict or an alcoholic, but 'Sun square Neptune' is an aspect for running away from the real world and reality (maybe into an ideology - like Pol Pot (born 19th May 1928) did- or into an addiction, into visions, into religious activities, or into a fake identity - like actors do-). Sun-Neptune is good for empathy and pretending, but it might be destructive, too. Neptune is the planet that might make you overly sensitive and vulnerable. Alcoholics are overly sensitive for a certain need, an addiction.

The nature of the square is pointing at a struggle or a problem that you have to deal with. And given the 'setting' (an ambience filled with drugs and alcohol and enough money to spend), it is not surprising what is happening.

The combination of the Sun with Saturn and Neptune points at the possibility of illnesses. And we might consider addiction as an illness. Fact is that alcohol damages the body.

YOUNGER LOVERS & DIVORCES
Now it seems that he left his wife for an 18-year old. There are a few explanations for this adventure (even without hour of birth).

1. Venus (and probably Mars, too) in the sign of youth (Gemini). He is attracted to younger specimens of the female gender.
2. Venus is conjunct Uranus (for artistic talent, sense of rhythm) and oriental in his chart. Another interpretation of Venus-Uranus is adventures - Uranus- in love - Venus-.
3. Mars and Uranus are connected in a half semi square (22.5 degrees), a very minor aspect, but still a valid one, IMO. This aspect is one of the indications in a male's chart for a divorce (and he had one already).
4. Venus semi square Saturn, a classic one.
5. Mars is quintile Pluto; male energy creatively connected to money and power (using and/or abusing power in a creative way)

CIRCUMSTANCES
Add the circumstances (being attractive because of being rich and famous, for example) and the present vulnerability and weakness (transit Neptune) and it is a clear picture. Also very clear is the picture of the midpoint Jupiter/Pluto opposition Aries Point, for his wealth and fame.
Geplaatst door Astromarkt op 4:32 PM