BIAS AND THE CHART OF ARIBERT HEIM 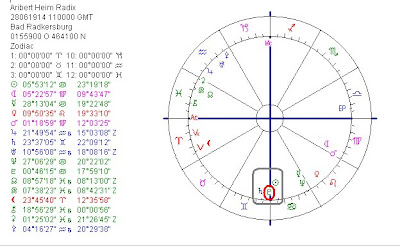 BIAS AND THE CHART OF ARIBERT HEIM
Aribert Heim, a wanted war criminal born June 28, 1914 is probably still alive. The positions of his birth day and his progression offer some insight in the characteristics of a doctor who’s nick name was Dr. Death. The chart for that day corresponds with the charts of others who were involved too much and abused their power.

It is believed that Aribert Heim, alias Dr. Death, is still alive, though rather weak. And the search for him, in order to make him face justice, continues…I have studied the charts of those who commit crimes in war times and I think that bias in cruel times, in addition to power to do whatever you like, is dangerous. I also think that a certain amount of placements in water signs indicates ‘involvement’ and ‘wanting to belong’, sometimes leading to bias. Bias can be used for the benefit of groups of people. And bias can lead to destruction.

Biased people are those who favor persons like family members or lovers above others. They have different judgments about the one they like and the one they do not like. The working of the mind of a biased person has been studied by Dr. Drew Westen, a psychologist at Emory. All of the politicians he studied had biased brains…

In times of war and suppression some collaborate because it is so much easier to do or because they simple want to be part of the majority. Others go further and commit cruel crimes. Heim is one of them.

HEIM
Aribert Heim, born 28 June 1914 in Bad Radkersburg (still alive today!)was very cruel in Mauthausen. His nick name is Dr. Death. The persons born on his birth day have a focus on issues of money, power, politics and influence (Pluto), are strongly committed to a cause or emotionally involved (water signs) and can easily use or abuse power and strength (Mars sextile Pluto). They are also likely to mix up facts and fantasy (Mercury-Neptune) and tend to be impulsive in their relationships or have a certain artistic ambition (Venus-Uranus). It depends on what planet is crucial in their chart. The symbol of that planet will be crucial in their life. As mr. Heim is called mr. Death, it might be a crucial Pluto. Pluto in his chart is close to Sun and Saturn. The combination of Sun, Saturn and Pluto can make a man unscrupulous, sometimes forces you to disregard signals of danger, and confronts you with the disadvantages of money, politics and power. See my article about Saturn and Pluto… on my site Astromarkt.

Pluto
He was born with an oriental Pluto square Aries Point (the most prominent planet), 40% of the placements in water signs (Sun in Cancer) and 3 tight aspects: Mars sextiel Pluto, Venus opposition Uranus and Mercury conjunct Neptune. Pluto was there when he became a Nazi.

When WWII started (in 1939) his progressed Sun changed sign to Leo and his life style changed. That was also the year that of his promotion as a medical doctor. Not an ordinary one: he was trained by the SS and a member of the Austrian NSDAP since 1935! That was with transit Pluto conjunct his progressed Sun.

In Mauthausen he committed such cruel crimes, that I will not mention them here. That was in 1941. As a memory he kept the skull of one of the victims he made, on his desk. Later he became a very skilled army doctor and saved the lives of many German soldiers.

After the war there was a short period of incarceration and in 1949 he was released from prison, he married, became a gynecologist and owned houses.

Jupiter
Heim managed to live an almost completely free life abroad. Jupiter is sesquisquare his Sun. Whenever he moved to another country the progressed Sun was in aspect with Jupiter.

In 1962 he was traced by Simon Wiesenthal and fled the country (progressed Sun opposition Jupiter). He worked and lived in Latina America and in Egypt. In 1969 he divorced his wife (progressed Venus semi square progressed Sun). Since 1985 he is supposed to live in Spain (with Sun inconjunct Jupiter). His heirs have not claimed the 1 million euro on his bank account, so he is probably still alive and in Argentina or the southern part of Chili. This year his Sun is sesquisquare Jupiter, so maybe dr. Death is on the move again? Or will he do as his name tells him to do and finally come home (his name is Heim and Heim means home…) and face the law?

BIAS
I wrote an article on Astromarkt about bias. I would like to add something here. Below you see the charts of 3 persons, one man, and two women. I noted their birth data when a saw a documentary about grandpa’s and grandma’s in prison. They looked normal and nice, and no one could have suspected them of being the cruel guards in Majdanek. Pisces and Cancer were abundant in their charts. Being involved too much is one of the possible effects of these star signs.

Alibert Heim is a Cancer. 40% of his placements are in water signs (and 30% in air). Moon and Mercury are in mutual reception. I have more examples of what water signs do (beneficial or not) when it comes to group involvement:

- Poncke Prinsen (Dutch soldier who walked over to the enemy Indonesian rebels and so lost his Dutch nationality) has 50% of the objects in water, Moon semi square Mercury and Venus opposed to Pluto.

- William of Orange (the first, the rebel leader against the king of Spain_ had 40% of his planets in water, a conjunction of Sun, Moon and Mercury sesquisquare Jupiter.

- Mordechai Vanunu (Israelian atomic scientist, told the world that Israel had an atomic weapon, was sequestered back to Israel and only after years he was released with severe conditions recently. 50% in water signs, Moon opposed to Mercury, Venus square Pluto.

- Martin Luther King, the murdered religious black leader, had Moon trine Mercury and opposed to Pluto and 40% in water signs.

- Mohammed B., the fundamentalist who slaughtered Theo van Gogh (a man who was rather offensive towards Muslims in his blogs and on the radio), was born March 8, 1978 with 60% of the positions in water (40% in Pisces) and Sun square Neptune.

- Lyndie England (8 November 1982, Fort Ashby, West Virginia), the abusive soldier in Iraq, has 40% in water signs (Scorpio) and says she had been influenced by her lover. The tightest aspect in her chart is Saturn conjunct Pluto (the disadvantages of politics and extremes).

- Johann Leprich, born 7 July 1925, was working as a guard in Mauthausen (concentration camp) and has electronical surveillance since October 19, 2006. He has 40% in water signs, Sun in Cancer conjunct the oriental Pluto and Mars is tightly square Saturn.

- Elfride Huth (14 July 1922 in Leipzig) has Sun in Cancer and Moon in Pisces. 50% of the positions are in water signs. She was sent back to Germany in September 2006, after the death of her Jewish (!) husband. In the Nazi-period she worked as a guard. It was so much easier than working in a factory... Mercury is square Saturn and semi square Neptune; Mars square Uranus and inconjunct Pluto. Pluto oriental.

Do you see the patterns? In specific circumstances and of course when other indications in the chart confirm it, the bias (the involvement) shown in the natal chart becomes a rather mortal or otherwise important issue in life. 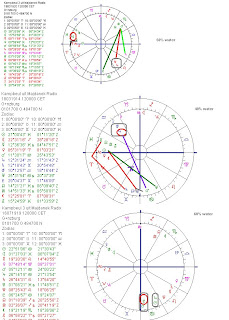 Positions on the days of birth of 3 concentration camp guards, punished in the 90's
Geplaatst door Astromarkt op 1:37 PM