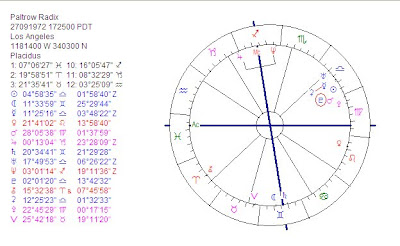 My latest post was about the influence of water signs when it comes to 'wanting to be part of it' or 'being involved' in a group.
Yesterday I visited a zoo. The 'ocean part' of it contained an explanation of the advantages and disadvantages of swarms. I think that that explanation about swarms could be used to explain the tendency to 'go with the flow'. That tendency is one side of the water signs Pisces and Cancer. So, I thought, NOT having water signs could have the opposite effect. Having over 30% of the placements, included Sun and/or Moon, in water signs can easily bring a person to 'going with the flow’.

GWYNETH
Gwyneth Paltrow was born 27th September 1972 at 17h25. (Some sites mention 28th of September, but most say September 27 and so does Astrotheme) She was born in LA. She has a lot of placements in air signs, the signs of communications. Pluto is oriental in her chart (rising before the Sun). Issues of influence, money, sexuality, life and death, strategy or politics are the issues that she is orientated on. (BTW I like the Jupiter-Neptune midpoint combination with the MC. It is the combination for those who work with a believing audience, like movie stars do or in the case of religious vocations).

KNOWING THE RIGHT PEOPLE
Noel Tyl mentions that Pluto oriental, rising before the Sun, is related to 'knowing the right people'. Gwyneth Paltrow became known and famous because she had a relationship with Brad Pitt. That affair lasted for 2 years. It was a mutual Moon-Ascendant relationship. Her Moon opposition his Ascendant. His Moon semi squares her Ascendant. And his Saturn sesquisquare her Sun. Attraction (Moon) and a goodbye later (Saturn)...They shared Mars square Jupiter (a drive to progress in life) and Mercury-Ceres aspects (she has the conjunction, he has the semi square, both nurture themselves with communications:). The relationship with Brad Pitt made her famous, but the fact that she remained famous can be contributed to her.
Geplaatst door Astromarkt op 10:09 AM