THE CHART OF TED STEVENS
3xNeptune is a crowd! 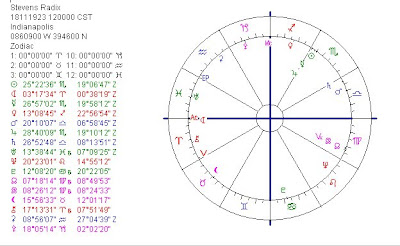 It is late for me, here in Europe, so I will be short about Ted Stevens, Alaskan senator, Republican, born 18th November 1923 in Indianapolis. He was a senator for a very long time, the longest serving Republican in the Senate. Now he has been accused of corruption and fraude. Why? And why has it been discovered now?

WHY?
Materialism: he has no placements in earth signs!
Grease: Venus is inconjunct Pluto!

WHY NOW?
No more than a year ago the progressed Sun was opposition natal Neptune and before, oppositon prgressed Neptune. I guess that that is when the investigations about him started and when he became a suspect. Transit Neptune has been conjunct the progressed Sun as well. Three times Neptune is a crowd.

SUN SQUARE NEPTUNE
In his natal chart the Sun is connected to Neptune in a square of about 5 degrees. Conflicts between Sun and Neptune often turn out this way: the nativity is not what the people take him for. It is a conflict that is fortunate in the chart of an actor. In the chart of a politician it is not. I have to say that Obama has the same wide Sun-Neptune square. I don't think it means that he is a fraud. I think it means that reality and dream are fighting each other. Some people try to realise their dreams in a wrong way.

Sun-Neptune conflicts are also frequent in the chart of suspects and missing people...whenever the media report about a secret or a mystery. Or when secrets come to the light, like in the case of Josef Fritzl. Every time when there is smoke and people wonder if there is a fire...