THE FEMALE IN THE CHART OF THE POPE,
now that the Anglicans consider a female bishop 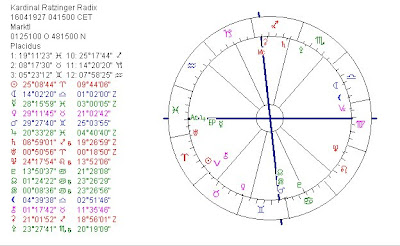 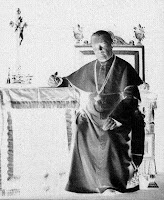 The Roman Catholic Church has announced that reconciliation with the Anglicans will be difficult if they allow women to be a bishop. I wonder why it never has been difficult that the Queen is the head of the Anglican church....
Well, is not this a good moment to have a closer look at the female in the chart of Benedict the 16th (16th - sic- of April 1927, 4h15 CET in Marktl)?

Hard aspects are: conjunction, semi square, square, sesquisquare and opposition.
As it happens, the present pope has Moon sesquisquare Venus and square Pluto. He has Mars square Uranus out of sign. He has Venus square Neptune.
So he has a lot of conflicts when it comes to relationships with women. Of course he never married, never was supposed to have a lover. But it might also be a good reason to choose a career without women in the neighborhood.

CERES
Lately I am particularly interested in Ceres. So I immediately noticed Ceres on top of this chart, conjunct the MC in Sagittarius. Ceres is the symbol of heir doom, agriculture, seed and ...motherhood. Now Mother Mary is of course a strong figure in the church of Rome. The position of Ceres in the chart of the pope and the idea of a Virgin Mary is convincing me more and more of the idea that Ceres rules Virgo.

Moon in Libra is afflicted. Venus in Taurus is afflicted. Both of the traditional female symbols are afflicted in the chart of the pope. And even though he may hold Ceres 'high', this might be no comfort for the simple human being of the female gender. This pope is not a feminist. And if he were, he would not have been a pope, would he?

RELEVANT:
About the moon, diets and behaviour
About Popes and their charts