MADONNA'S BIRTH CHART, HER BROTHER AND HER MARRIAGE 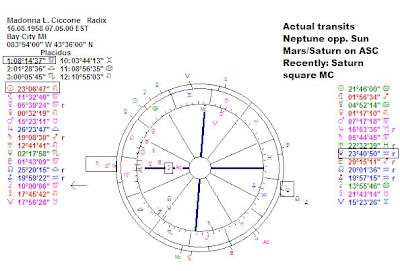 Transits of Saturn and Neptune almost never bring good times. So it is in the case of Madonna. See the chart above for the situation at the moment. And read the papers. Her marriage is in danger and her brother is revealing her secrets.

TRANSITS
Saturn was square the MC recently. Now Saturn is close to the Ascendant and so is Mars. Saturn shows you the disadvantages of life in many ways. In this case the disadvantages of her public position (MC) and of her relationships (ASC). Transit Neptune opposition her Sun adds gossip and highlights things she would have preferred to hide.

PROGRESSIONS
A few weeks ago the progressed Sun of Madonna was conjunct her progressed Mercury. Mercury is the symbol of a.o. brothers and sisters. So that is when she started having a 'life with her brother'. Her brother is writing a book about her, revealing secrets and private stories of the past. She and her brother never got along very well. The progressed Sun brings that to the light.

CERES AND THE ARTIST NAME
BTW: a few posts ago I mentioned Ceres on top of the chart of the Pope. And lately Ceres on top of the progressed chart of Angelina Jolie. Now I notice that Ceres is conjunct the Ascendant of Madonna. The Ascendant is related to nicknames. Ceres is the symbol of motherhood and the godess of nature. The Madonna (mother Mary) is also a symbol of motherhood. Both women (Angelina and Madonna) have a couple of adopted children.

The artist name of Freddy Mercury corresponded with Mercury on his Ascendant. I presumed that Freddy Mercury knew he had Mercury angular. But, would Madonna have chosen her name knowing about Ceres? I doubt it. So there might be something natural about that name and about the choice one makes for the name to represent oneself.

URANUS
Here you see the natal chart of Madonna. Notice that she has an oriental Uranus (for the controversial effect) and that Uranus is square Mars, prominent because of the semi square with Aries Point. Should she have a temper, I wonder? I am sure that she does have a very special energy.