P.M. OLMERT, HIS CHART AND SATURN FOR ENDING THINGS

The Israelian Prime Minister Olmert will step back in October this year, with transit Saturn square his progressed Sun. Saturn is the symbol of (a.o.) separations, things coming to their ends and for breaking up. 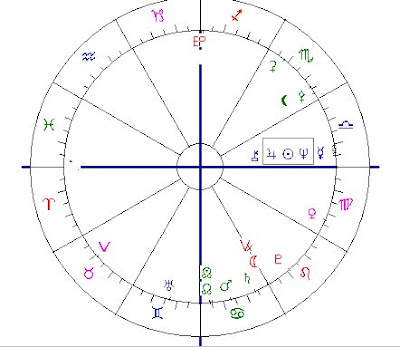 In August 2006 I wrote about OLMERT:"The Israelan prime minister Olmert was born in Binyamina at September 30, 1945. Today, during an expanding invasion of the Libanon, his progressed positions show an interesting midpoint combination. Progressed Mars is about 3 degrees Leo (when born at 12 it would be 3d4m56s Leo). Progressed midpoint Saturn/Pluto is at 3d3m47 Leo. This exact and direct midpoint combination usually refers to murder, death and killings and that is what is taking place. As you can read in the article about Mars and Pluto, there is no astrological indication for the clue in a 'who done it'.Fact is that Ehud Olmert announced that the militairy actions will be intensified and that fits with the astrological statement. You can also read the combination as 'die hard' Saturn/Pluto) fight (Mars).

SUN, JUPITER AND NEPTUNE = RELIGIOUS CONVICTION
In his natal chart there is a stellium in Libra of Sun, Mercury, Jupiter and Neptune, possibly indicating a mind and opinion based upon ideology or religion. There is more to read about Jupiter/Neptune in the charts of popes and the martyrs in Algeria on my site
Astromarkt."
Geplaatst door Astromarkt op 7:45 PM