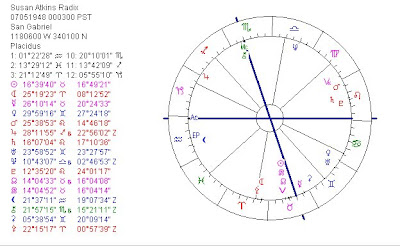 No parole for Susan Atkins, who is dying due to brain cancer now. Susan Atkins is a multiple killer, member of the Charles Manson-gang and one of the murderers of the pregnant Sharon Tate (on August 8, 1969). She said she thought Charles Manson was Jesus...Few people will empathize with this woman. She spent almost 40 years in prison, since October 1, 1969.

Susan Atkins was born May 7, 1948 in San Gabriel at 3 minutes past midnight, so tells me my Astrolab database. In her chart you see Chiron on the Midheaven, an oriental Moon and no placements in water. So she did not have much compassion and her own needs (Moon) come first always (oriental position). And that her youth and her family or caretakers (mother) were of prominent influence. When her mother died and her life changed from that of a middle class girl into a wanderer her progressed Sun changed sign. That was in 1962.

SUSAN AND CHARLES
Charles Manson is born November 12, 1934, 16h40 EST Cincinatti. His Sun is tightly conjunct the Midheaven of Susan Atkins. As his Sun is square Saturn, his Saturn is square her Midheaven, so that he brightened her destination (MC) and made her famous and... So that he had a bad influence on her position in life.
Or did she have a bad influence on his life? Both have Sun square Saturn (they share Sun square Saturn). Both had a bad start in life. 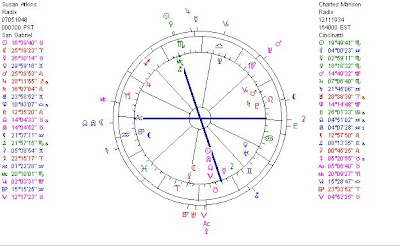 Chart of Atkins, position of Manson on the outside

SUN SQUARE SATURN (and biquintile Neptune)
Susan Atkins’ Sun square Saturn is one of her most tight aspects. She also has the MC square Mars/Pluto and Mars/Saturn so that the issue of unnatural death is linked to her position in society.

Susan Atkins' parents were alcoholics. Her mother died young from cancer. And that is how Susan Atkins will end her life, too. See Sun square Saturn and biquintile Neptune: the combination of illnesses (Sun, Saturn and Neptune).

MARS SEMI SQUARE NEPTUNE
This minor aspect in the chart of Susan Atkins refers to use and abuse of drugs and medication and to possible crime. I did a study (click here, but...it is in Dutch) about the issue of crime in the charts of criminals, sollicitors and attorneys and I found Mars-Neptune connections in most of them.

IS THIS JUPITER?
Now Susan Atkins is terminally ill. In June, Atkins' attorney, Eric P. Lampel stated that Atkins condition had deteriorated to the point that she is paralyzed on one side, can only talk "a little bit" and can't sit up in bed without assistance, says Wikipedia. And the judge did not let her go out of jail. Would not you expect Saturn or Pluto transits? Instead there is transit Jupiter trine her natal Sun. Most of the time this transits is beneficial, so I really wonder what Jupiter is doing:) 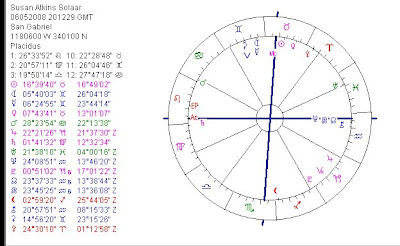 *) Chiron on the Midheaven links the 'wounded healer' to the position in life. Chiron in my eyes is also the ferryman (the symbol of the person who brings you to the 'other side), but that is wrong (please see the commments) and Chiron is the centaur (a dangerous creature when drunk, but mostly seen as 'the wounded healer').

Nicely done. I've observed Jupiter involved in death or its approach, possibly as a (really) long journey, or the expansion of our world. And, I would add that Chiron is not the ferryman; that's Charon, which I believe is one of Pluto's Moons (?), easy to confuse the two. A very interesting article, on an unusual individual. Thanks for sharing your analysis.

Yes, it is indeed easy to confuse Chiron (Cheiron in Greek) and Charon. Thank you for pointing at that!

Chiron was a centaur. Centaurs were violent when intoxicated (with alcohol) but this one sacrificed his life to save that of another. He gave up immortatility because he could not heal himself.
I wonder what Chiron is doing on the Midheaven in this chart. She killed, adoring Charles Manson, and being drugged, as one of the centaurs? She was certainly not a healer...

About Jupiter and death: I share these observations. My idea is that Jupiter contributes to improve the conditions of the final moments or the situation as a whole (in the eyes of a patient). Some people are real happy to die (f.ex. when they are very ill) and some people get assistence in the final proces to ease the pain etc. In those cases Jupiter is there (too).Maybe worth a study...