ASTROLOGY CHART OF EDDY MURPHY
and why he stops acting now... 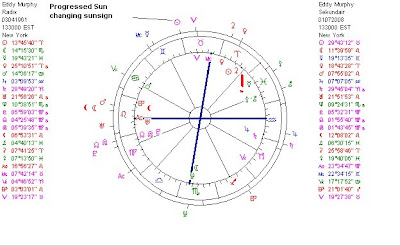 Eddy Murphy has announced his retirement. He will make no more movies. Now why does he change his lifestyle with his progressed Sun in 29d43m12 Taurus, about to change sunsign? I think it is to show that astrology works:)

I wrote about Eddy Murphy before in August 2007, when he refused to recognize the child he had with Mel B., on the 23rd June 2007 (see files of Astromarkt if you like). I pointed at indications for divorce(s): Moon conjunct Neptune, Venus square Saturn, Uranus on the Ascendant AND Sun inconjunct Moon do not make it easy to got or stay married ever after.

Mercury is calling in his chart, Moon and Neptune are crucial. Communication and a need to escape or pretend are prominent in his chart. Aren't those important tools for an actor? He also has the Sun connected with Jupiter and Pluto by quintile and biquintile: a creative combination for succes and self confidence (the power of being positive). Mars is square Sun (and so connected to this combination).