THE PROGRESSED MARS OF NAOMI CAMPBELL 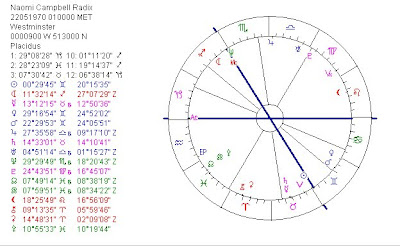 Naomi Campbell is beautiful and she has a problem with agression. She was convicted in March 2007 and she does not seem to have learned from it much. Whenever a progression or transit 'touches' her Mars, she cannot seem to control herself. Mars is biquintile her Ascendant and that makes her creative in the way that she expresses her anger.

Early March 2007 Naomi Campbell was convicted: she had to clean a building for five days (after hitting her servant with a mobile phone). This happened to her with transit Saturn semi square to the progressed Sun & progressed Uranus. Transit Saturn was also sesquisquare the progressed MC. Notice the combination of limited -Saturn - freedom - Uranus -. 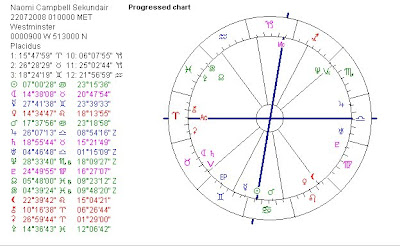 Naomi was born 22nd May 1970 in Westminster at 1:00 a.m. Prominent in the chart: a crucial Sun and Neptune on the meridian (for movie star for example or for a double life), Venus on Zero Aries inconjunct the ascendant (for beauty that somehow does not match with the way she presents herself), a calling Moon (for fashion and needs/behaviour at any level). She has Jupiter on top (she is above all an international).

There is a special combination in her chart. Venus is the Apex in a Yod with Ascendant and Neptune, pointing at the fotogenetic model that she is.

Naomi is a prominent person with 5 prominent positions: Sun, Moon, Venus, Jupiter and Neptue...The pattern of a beautiful lady with a public and fans.

But... the problem is that she also has Mars square Pluto (use or abuse of power, strength and influence….for example: using violence). In her progressed chart Mars is ruler 1 and in March 2007 this planet was on the lowest spot in her chart. But what is the excuse this time?

As an international (Jupiter) she caused problems in a German hotel where she destroyed a sheet and refused to pay for the damage. That happened with transit Uranus square progressed Mars (progressed ruler 1, again). I guess she was a bit irritated and exploded...And I doubt that this will be the last time that we heard of such an incident this year. Her solar return chart has Mars conjunct the IC!

My wife went to school with Naomi (Italia Conti); it was a dance school mostly and she relates to this day how Naomi could not dance, had flailing elbows and was a menace whom everyone gave a wide berth accordingly. So, she was made to feel clumsy and awkward compared to say, my wife, who was a very accomplished ballerina; she would throw her toys out of the pram quite frequently as a result of being considered ungainly by most everyone else: teachers included.

I see what you are saying about Ma sq. Pl (I have it myself) and it can give a hair-trigger and quite murderous temper in the unevolved I would guess, but in Gemini/Virgo the 5th and 7th it is going to have a much more mental, rather than physical quality I would guess. Sudden violent outbursts are more Chiron in Aries, especially when you consider she tends to break 'things' and that falls in the second.
Just a thought. What do you think?

Gemini rules the hands and Mars in Gemini is a good tool for for example tennis players. So using (Mars) hands (Gemini) and eh...slapping...is one of the ways to manifest Mars in Gemini, I think.

The positions in Aries (Chiron and Ceres) are ruled by Mars and could be additional, yes. Naomi made it, and so she has the power to act as she does (not much restriction needed). And often when a person is allowed to do as he/she pleases things go wrong. I forgot to mention Saturn's position semi square Aries Point and Mars/Uranus, btw, so that she became known for her explosive nature...And I hardly dare to point at the V (rising before the Sun) of Vulcanus, a mysterious spot that I see whenever there is something Violent.

Mostly there are more than one indications when a person is behaving in an agressive way. The fact that Mars is influencing the solar return and progressed chart hopefully means that most of it will be over one day...

Thanks for your remarks and for your story!:)