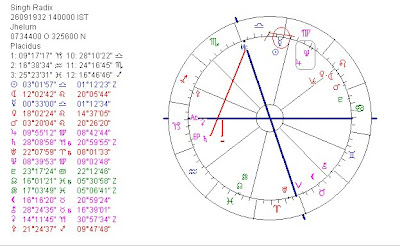 Manmohan Singh is the Prime Minister (P.M.) of India. He was born 26th September 1932 at 14.00 hours in Jhelum (so I am told). On the 22nd of July he won a motion of confidence after accusations of bribery. That corresponds with the 'Thank God'- combination of transit Uranus opposition progressed Jupiter. And with transit Jupiter square progressed Ascendant (a success), together with transit Neptune semi square the natal Ascendant for the suspicion. He made it...this time. But there are difficult transits of Saturn on the way!
This chart has a prominent Mercury and Saturn. Let us read it...

CONVICTION AND COMMUNICATIONS
No matter what birth time, Mr. Singh has prominent and oriental Mercury (rising before the Sun and opposition Aries Point) for communicative skills. He also has two tight aspects in his chart: Sun sextiel Mars and Jupiter conjunct Neptune. The Jupiter-Neptune combination might point at a spiritual conviction or at the audience that he has (perhaps followers or fans). Mr. Singh is the first sikh in his position.

IN HEART AND SOUL: PLUTO (for politics and money)
Pluto seems to be of importance for the moments of change in his career.
In 1989 his Pluto (retrograding in progression) returned to the position at birth (Progressed Pluto conjunct Natal Pluto). That was in the middle of the transformation from bank manager to minister of finance. In 1963, when he became a professor, Pluto started retrograding.
The importance of Pluto in respect to his career fits the nature of his working field: financials. Pluto makes a wide square with the Midheaven, so how could Pluto be so important, one wonders...Look at the midpoint Sun/Moon (the point that indicates where your heart lies) and see the semi square with Pluto...His hearth lies with politics, power, influence and money.

SUN/MOON
Pluto is connected to Sun/Moon and so are Uranus (and Neptune if you take more than 1 degree of orb). It means that Uranus, Neptune and Pluto are connected in his chart. It is a generational combination that points at the catastrophes and dramatic changes experienced by his generation.

This PM is in heart and soul a man who is made for revolutionary changes and not just in his own carreer...

JUPITER FOR PM
On the 22nd May 2004 he became the PM of India. On that day transit Jupiter was trine Ascendant (and conjunct Jupiter) and Mars opposition Ascendant. Mars-Jupiter-Ascendant is a trio for success!

THE PROMINENT SATURN AND THE TRANSIT
Provided that this is the correct birth time, Saturn is tightly square the Midheaven. Most of the time the Midheaven afflicted by Saturn is not a fortunate aspect. It usually points at a fall down at any time in life, due to too much ambition. As such a step back has not occurred in his life, it might be soon. In November 2008 transit Saturn will be conjunct his natal Sun for another moment in time to highlight his mistakes and the disadvantages of his way of life or failing physical conditions. Some step back with such an aspect. Saturn does not make major aspects in sign or orb 5 degrees. That makes Saturn (ruler 1! in the first house) a prominent planet. One of the qualifications that I found on Wikipedia was that he is a cautious man. The Capricorn Ascendant and the position of Saturn is certainly debit to that.

SOLAR RETURN SEPTEMBER 2008: SATURN...
There is another reason for concern if this is his birth time. His solar return chart has Saturn close to the IC (and Uranus close to the MC). The MC is in the 19th degree of Sagittarius, square the progressed Sun. So in November the transit of Saturn will also hit his solar return MC.

BTW G.W. Bush also has Saturn square MC. He never stepped back. But there has never been a president less popular than he is...The position he has probably does not make him happy. I don’t know about Indian politics and polls, but the upcoming transit of Saturn with his progressed Sun could mean that it will be hard to keep the present quality of life of mr. Singh. In a way, the effect of the transit is already there with the needed motion of confidence.

ALSO INTERESTING:
Saturn and the importance of the position in the chart
How to interprete midpoints
Michael Jackson and transit Saturn
Geplaatst door Astromarkt op 6:41 PM

Every zodiac brand reflects a different side of your character, despite the fact that many of them will be more emphasized when compared with others.