BIRTH POSITIONS AND CHARTS OF THE AMBANI BROTHERS (RELIANCE)

In 'KPN Today' I found a message about two billionaires in India, brothers, Mukesh and Anil Ambani, owners of Reliance. They seem to fight each other and they should be each others opposites. The relationship has not been improved since father Ambani died in 2002 and Mukesh and Anil had to work together. They split the company in 2005. Up to now their mother has been able to keep things under control. But now Anil wanted to sell stocks. His brother says that he has the first right to buy them. If not, Anil would have become richer than his brother.

The charts erected for the birth days of the men (found in Wikipedia) confirms the picture of Mukesh having a stronger personality. The charming side of Anil is shown in the mutual reception of Moon and Venus (ruling each other, in each other's sign).

It is easy to see the influence of the mother. In both charts the Moon is oriental (rising before the Sun). See below... 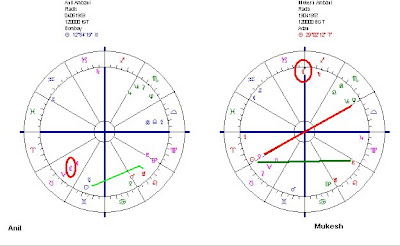 MUKESH
Mukesh Ambani is the eldest brother. He is born April 19, 1957 in Yemen. He is the 5th richest man on earth. They say that he is a typical business man.

He has Sun in Aries and Moon in Sagittarius or Capricorn (I guess Capricorn). He is a hard worker with an oriental Moon (rising before the Sun). That places his needs in the first place. On the other hand, this Moon points at the importance of family and in particular the mother!

Mercury and Saturn are calling (I call them calling, since they do not make Ptolemaic aspects in sign or orb 5 degrees) and that refers to communications at any level and at ambition, management and ....business.

The tightest major aspect is Sun trine Pluto. At the very moment transit Pluto is trine his Sun and trine his Pluto. That does give him a better chance of winning the business fight with his brother.

Notice that his Mars is inconjunct the Node and that 50% of his placements are in fire signs. His abundant energy has a sort of mismatch with 'community, family or organizations). This sort of struggle cost him a lot.

Another tight aspect is Venus opposition Neptune and square Uranus. It points at possible artistic aspirations (but only valid in the eyes of the public with Venus and Neptune angular or on top). Funny is, that this combination of Venus-Uranus+Neptune might cause allergy and that I read that brother Anil uses lots of perfume. Also this combination is afflicted by Anil's Mars! It seems that Anil activates a physical or emotional allergy.

ANIL
Mukesh' attractive little brother was born June 4, 1959 in Mumbai (former Bombay). He is not so much different from his brother. He has the same prominent mother (Moon oriental). With 50% of the placements in fixed signs, he must have a strong will. Furthermore with Sun and Uranus, he wants to distinguish himself and be different, independent. So it must have been sour for him to have to do business with his brother. Right now his progressed Sun changes sign and so will his life style change.

Is it just coincidence that Venus and Neptune are 'in the game'?

Clues for the amounts of money that they earn:
a. Pluto, related to Sun/Jupiter & Venus/Jupiter, and Aries Point or (Zero Aries) square Venus/Pluto on the day Mukesh was born.
b. Aries Point sesquisquare vierkant Venus/Pluto $ Mars/Pluto + opposition Mars/Jupiter on the day tht Anil was born.

RELEVANT:
Times online about the combative relationship of the Ambani brothers
I think the message in KPN today is not really fresh, since I cannot find international messages about the issue.
Geplaatst door Astromarkt op 1:35 PM