CHART OF AUNG SAN SUU KYI
and the house arrest 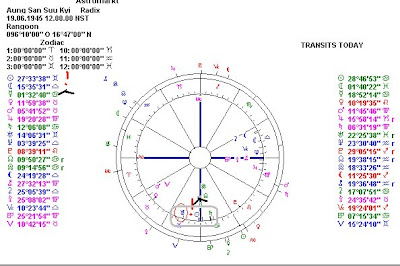 These are the birth positons of Aung San Suu Kyi, leader (notice the 'calling*) 'Sun!) of the Burmese opposition who has not been allowed to leave her house since she won the elections.

She has an oriental Uranus - planet of freedom and rebellion - (for an orientation on changing the world). Her Sun is conjunct Saturn/Uranus, in the middle of Saturn and Uranus. This points at the importance of the theme of limited freedom in her life...
Mercury is also prominent because of the position square Aries Point. The combination of Sun, Mercury and Uranus is the combination of the will (Sun) to have an independent (Uranus) opinion (Mercury).

Aung San Suu Kyi is in the newspapers today, because a Burmese minister said that she might be released in about half a year. Not long ago Ban Ki Moon tried to talk her free. Within a year Uranus - prominent in her chart - will be square her natal and inconjunct her progressive Sun. As her birth hour is unknown it is not clear when exactly. And an inconjunction (quincunx) always involves 'besides' and 'but's...'. The Birmese government has shown before that their place in society values more than the freedom of the inhabitants. Click for the former post about the Birmese situation and the chart of Than Shwe.

*)calling: without major aspects in sign or orb 5 degrees. The Sun symbolizes leadership or drawing attention.

UPDATE JULY 22nd: the same minister now says that he was misunderstood and that it will be late 2009 before she will be free.