CHART OF DINKO SAKIC and why he is different from the rest... 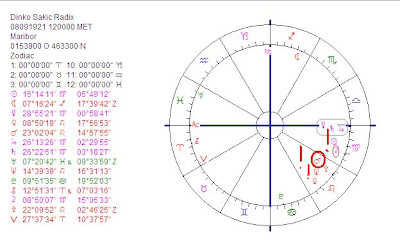 Statistics don't work the other way around. But sometimes that is so, because there is an important difference. To prove this I present the chart of Dinko Sakic, born 8th September 1921 in Maribor. He died yesterday, in prison. In 1998 he was convicted for the crimes that he committed in World War II.

There is difference in the positions on his birthday, compared to those of the captured or extradited camp guards of my posts of last week. They often have at least Sun or Moon in Cancer or Pisces and a (sometimes slightly) over average amount of placements in watersigns0). This difference does not contradict the findings at all. Because there is also a difference in position in war time. Dinko Sakic was not a follower, he was a leader. He was one of the men in charge of the fascist army 'Independent State of Croatia' and he was the chief of the Jasenovac concentration camp. The other 'biased criminals' were low fish. He was a (captured) shark.

Let us have a look at his astrological I.D.
On his day of birth there were no placements in air signs. That can make a person rather unreasonable, though talkative. Dinko's chart was an earth and fire mix, he was creative, he was constructive and he was clever.
His Sun is calling (no major aspects in sign or orb 5 degrees) so that he drew attention and became a leader.
Mars is calling, too, so that he became a fighter. And Neptune is calling to complete the combination of the criminal (Mars-Neptune) leader (Sun). Watch the oriental Ceres, the symbol of heir doom and inheritance in this chart of a nationalistic person.

Still, there is some "Pisces influence" connected with the crimes that he committed. Dinko Sakic had progressed Mars opposition Uranus in Pisces and progressed Sun inconjunct Uranus in Pisces in the period that he was commanding the prisoners camp in Croatia. In 1998 he was extradited and convicted. That was when his progressed Sun changed sign...and was quindecile (105 d) Neptune.

Now he died, an old and very ill man, with transit Saturn opposition progressive and natal Uranus, and progressive Saturn inconjunct progressive Uranus, in prison, like a lot of his victims. His death is accompanied by Jupiter trine Sun (possibly he was happy to die, given his condition).

PS
I know that there are astrologers who see Pisces as 'soft' and Virgo as 'docile'. I don't. You can have leaders and servants or followers of all sorts and kinds. Leaders often have a prominent Sun and so had Sakic.
Geplaatst door Astromarkt op 7:49 PM