THE ASTROLOGY OF JUSTIN TIMBERLAKE AND BRITNEY SPEARS 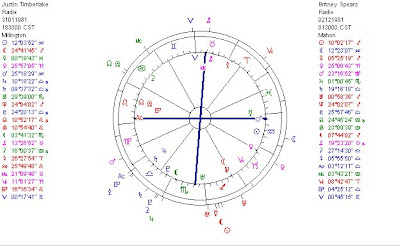 JUSTIN TIMBERLAKE will be on stage of the Fashion Rocks-concert in New York this year, in September. 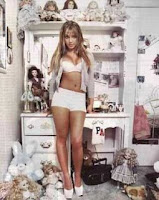 Justin Timberlake was once the partner of Britney Spears. It looks like it was a good match. Her Moon is conjunct his Sun! Her Venus is conjunct his Venus. And still...it went wrong. Maybe because of her Venus inconjunct his Ascendant, but most probably because they were young and in their charts you see the indications for having more than one serious relationship.*) Justin now has a relationship with Jessica Biel. Nevertheless, Justin and Britney will be together: at work. This thanks to Madonna, who asked both of them to join her tour.

Justin Timberlake has a few things in common with other male beauties. He was born January 31, 1981 at 18h30 CST in Millington. His Moon is oriental and that is attractive. Mars opposition Ascendant gives him the looks of a 'real man'. Venus is in the cool (...) sign of Capricorn, just like in the chart of Brad Pitt. And for being extra cool Justin has Venus in mutual reception with Saturn. That connects beauty and women to business.

Justin Timberlake is an Aquarius and his Ascendant is Leo.