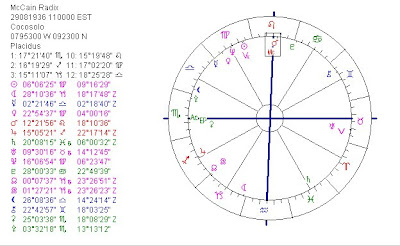 On Astrology Mundo I found breaking news: Mr. McCain is born at 11 instead of at 9 a.m.

Now that is interesting. Here is the chart, with Mars on the Midheaven, oriental. Mars is even more important than in the 9 a.m. chart. It would make him first of all and above all a soldier, a fighter or perhaps an entrepeneur.

With this bith time the progressed MC will be semi square Neptune on the 16th November. And solar arc Saturn semi square MC! But on the other hand: Jupiter sits on the Midheaven of the solar return chart! Hmm...and that is very, very contradictional.

It is in the middle of the night over here, so I will have a better look later. Now I get the idea of a heavy dissapointment. Jupiter is for successes. But at a certain age Jupiter might mean retirement or becoming a grandfather.Sigh.
Geplaatst door Astromarkt op 2:28 AM