THE CHART OF SREBRENICA 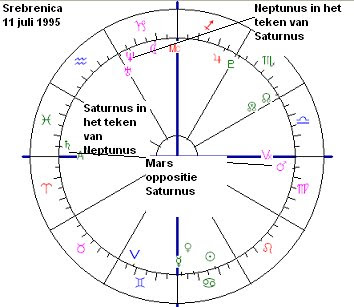 SREBRENICA: HIDDEN (NEPTUNE) DEATH (MARS/SATURN)
On the 11th of July 1995 Mladic captured Srebrenica and ordered the separation of men and women. There was a mutual reception of Saturn and Neptune, with Mars opposition Saturn, tightly.

Srebrenica was the so called protected UN area in Yugoslavia that was captured on the 11th of July 1995. The Dutch government had agreed – and one might wonder why, in such conditions and without support - to protect that little dangerous spot in already Serbian country. It was a bad day for the people there and a black day in Dutch’ history. About 8.000 men were separated from the women and brutally murdered. I will never forget a documentary about the events. There was a shot with two young men. They were friends, they had the same age as my son at the time, and they wore jeans and Nikies. It was as if I saw my son and his friends walking. They had their arms around each other and death was in their eyes when they were forced to walk towards their last minutes. The arrest of Karadzic brings this memory back again. The boys never came back. It is a shame that this happened in Europe, in 1995.

On that day Mars was opposition Saturn (hard aggression) and Neptune trine Mars and sextile Saturn (easily covering up the violent events). Like in the chart of Mladic (who’s Neptune is opposition Aries Point) Neptune plays an important role in the chart of the massacre of Srebrenica. The leading officer of Dutch Bat was pictured toasting with Mladic. Pictures and alcohol also are part of the symbol of Neptune.
Geplaatst door Astromarkt op 9:59 AM