ASTROLOGY CHART OF EDGAR MITCHELL
and the media hype about aliens

NASA does not share the opinions of Dr. Edgar Mitchell, astronaut, on the issue of UFO's. Mitchell had an interview with Nick Margerrison on Kerrang! Radio. He said that aliens visited earth and that this had been covered up by the governments. He did not give any proofs, nor was he ‘backed-up’ by other astronauts. At least, although many pro-UFO sites say that all astronauts have seen UFO’s and think that they were alien. I have not found a clear statement on other sites. And as NASA says, it is an opinion.

NEPTUNE FOR THE MEDIA HYPE
Interesting is, that Mr. Mitchell now has transit Neptune, ruler of his eight house, inconjunct the Sun*). It is an aspect that refers to an appearance in the media that was rather misbalanced. Neptune is the planet of imagination, scandal, media, secrets and suspicion. Neptune is his oriental planet. That is the planet that rises before the Sun. So vision, imagination, beliefs, ideals, dreams etc. come on the first place in his life. Because Neptune is an important planet in his chart, his contacts with the media will also be important... 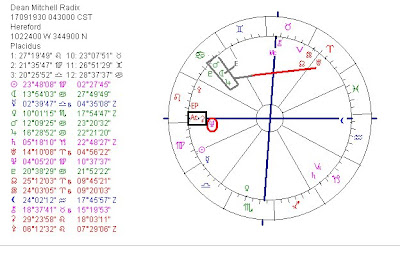 BTW It is NOT the first time that Mitchell tells us that he believes in aliens. Read this transcript of an NBC program dated...April 19, 1996*).

Ceres (mother Earth!) is angular, conjunct the Ascendant. That means that the symbol of Ceres is crucial in his life. And I think it is astrological humor that the Moon is the end dispositor of the Midheaven. The MC is in Taurus, ruled by Venus, ruled by Pluto, and ruled by ….Moon!

MOONWALK
Mr. Mitchell is age 77 and holds the record of the longest even moon walk, on February 9, 1971. His progressed Moon (16d25 Cap) was opposition Jupiter (16d29Cancer) that day. His progressed Ascendant AND MC changed sign in the year of his extraterrestrial flight. Of course this event had great impact. His solar return for 1970 had Ceres on the Ascendant (like in the natal chart). And Jupiter (for succeeding) was on the Descendant. Soon after the event, he became interested in the paranormal field. That is some change for a scientist! The Sun, Ascendant or MC changing sign in progression has great influence.

(Like Mr. Mitchell has his doubts about governments and aliens, lots of people have their doubts about the Moonwalk, see the link. When you read that, you start thinking that the only real moonwalker is Michael Jackson)

*) On April 19, 1996 - the day he gave another interview about aliens - Mitchell had transit Neptune inconjunct Ascendant...