THE LOST MEMORY OF BJÖRN ULVAEUS
and the possible effect of drumbeats... 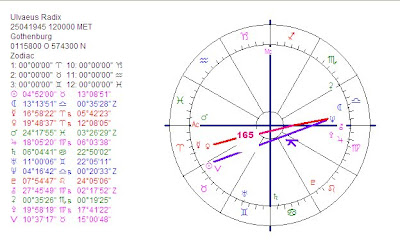 Björn Ulvaeus lost his memory, all of the sudden. Lost is symbolised by the quincunx and by Neptune, symbol of the amorphous. In his birth chart (he was born 25041945 in Gothenburg Sweden) the Sun is inconjunct Neptune (and Saturn is square Neptune). The inconjunction symbolizes the mismatch between health and vulnerability or sensitivity. As Neptune is also the planet of the artist and of music, it might well be that music did this to his memory.

It may sound odd, but I remember a night in the theatre with drum sessions, very loud, for 2 hours. Afterwards my husband and I could not remember passwords and the code to block the alarm system in our house. We had to join forces to find them and we could not pin money that night. We decided never to repeat such a night, because it was rather scarry to not be able to remember things that you need to know. It came back in a few hours, but...what if you are sensitive and hear these rythms all the time? Björn Ulvaeus IS sensitive. He is an artist and rather obsessed by music: Venus is quindecile Neptune (Venus 165 d Neptune). Now that the progressed Sun is getting closer to Saturn, the failing system is in the spotlights. The period with progressive Sun conjunct Saturn is not the most easy period in life...Limitations and restrictons are part of the experience. Saturn is connected to Neptune; the combination Saturn-Neptune often refers to being sick or ill.

Of course, I am not a doctor! But I like to tell you what the effect of drum beats could be. Take care!
In the meantime Wikipedia tells us that rumours of complete lost of memories are untrue and probably caused by bad translations of an interview. And eh..Neptune is now opposition Venus and conjunct his Neptune. So would Neptune be transitting to produce FAKE?:) Anyway, he should be cautious the coming year...

After all, it seems that wrong translation was the cause of the lost memory:). Very Neptunic rumor!