ASTROLOGY CHART OF TWINS OF ANGELINA JOLIE AND BRAD PITT

UPDATE:
Birth certificated time of birth of Knox, the first baby is 18:37, see chart below and his sister a few minutes later. What remains the same is in Italic! 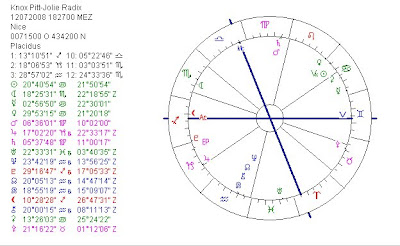 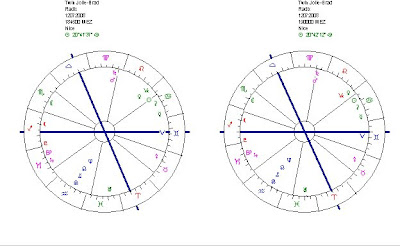 Angelina Jolie gave birth to a twin, a boy and a girl, at 18;45 and 19:00 hours, by caesarian. Knox Leon and Vivienne Marcheline; these are the names for the boy and the girl that saw the light yesterday, 12th July, in Nice. 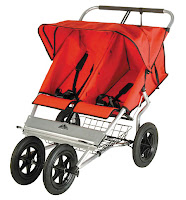 DOUBLE JOY
The twin have their Jupiter square the Jupiter of Angelina and their Venus conjunct hers, perhaps for double (Jupiter) fun (Venus):)
But watch Angelina's Saturn - responsibilities, parenthood - in the 18th degree of Cancer, opposition the Jupiter of the twins. Jupiter is ruler 1 of the twins, in Capricorn and in the first house.

ARTISTIC TALENT
The opposition coming from Saturn might point at the necessity to give the children space to develop in their own way. And that will be an artistic way, no doubt about that. Venus (ruler MC) and Neptune are calling!! And with the Moon as end dispositor, acting might have something to do with it (memorising and keeping the past alive). The tightest aspect is Venus inconjunct Pluto. The axis Venus-Pluto is the financial axis, the inconjunction is pointing at a 'disbalance'. Some of that disbalance might be the 7 million dollar worth first picture of the babies. Another thing is that this aspect sometimes causes problems in love life and relationships. But not right now. With their Moon in Scoprio sextile Jupiter they will be overly spoilt and have a happy time at home.

TEMPER
The way the babies came to the world was hasty (with surgery) and the crucial position of Uranus down in the chart, in a quindecile (165d) with Uranus reflects it. I bet these kids have a temper!

SYNASTRY = TRANSITS
Of course the transits of the day the children were born have a certain influence. Yesterday Angelina had Jupiter square Jupiter and opposition Saturn., Venus conjunct Venus and Ascendant, and Venus square Uranus (a combination that refers to a complication or surgery related to beauty or ... specific female things). As Pluto - her ruler 5 - is inconjunct her Ascendant we might asume that this birth had a lot of impact and raising these two will be a challenge. Still, she underwent surgery at the moment of birth, so their were circumstances in the 'meeting' and interaction that won't repeat themselves.

Pluto is BTW the symbol of LIFE and death. Angelina has her progressed MC sesquisquare progressed Pluto right now. In the progressed chart Ceres (motherhood!) is on top.

BRAD PITT HAPPY FATHER
One thing is certain: when baby 1 was born Brad Pitt's Jupiter was on his IC and that is a very good sign for support and understanding. Brad's Pluto is inconjunct the IC of number 2. It seems that the second baby will tned be the more challenging one. Or that at the specific moment that that baby was born, Brad had stress and was impressed.

MORE SYNASTRY
Baybe number 1 (I don't know if it is the boy or the girl) has his mother's Mars on the IC and her Sun/Mercury on the Descendant.

Baybe number 2 has not got prominent placements. Angelina's Mars/Jupiter is on the baby's IC. 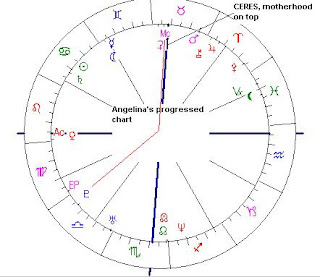 I think Angelina's Sun progressed to Cancer really shows her transition from Gemini Wild Child to Cancerian Super Momma. I think Brad's Sun has progressed to Capricorn, which manifests his dutiful regard towards fatherhood. Thanks for posting these charts!