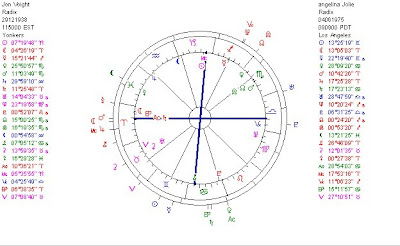 Jon Voight (born December 29, 1938 at 11h50 a.m. EST in Yonkers, NY) is the father of Angelina Jolie, but they don't see each other any more. That is the reason why he has not seen or spoken his daughter about the recently born twins.

Jon Voight's Ascendant is conjunct Saturn. It means that he is representing himself as an adult, a responsible parent and with reservations. Often people with Saturn on the Ascendant tend to keep a certain distance from others. His Ascendant/Saturn is tightly connected with Mars of Angelina and also tightly inconjunct his own Mars. His Mars is also opposition Uranus. This reminds me of the twin's Mars-Uranus. Maybe, if they have a temper, they have it from their grandpa.
Maybe Astrologyweekly is right and the description matches with Jon Voight's feelings guilty because he did not seem to care much in the past and now he cannot seem to show that he does.

MARS FIGHTS MARS, UN UNEQUAL BATTLE
Mars is inconjunct Angelina's Mars. I have seen so many examples of Mars-Mars-conflicts with fighting people! This is certainly not a good aspect in a relationship. The quincunx shows that the competition or battle is unbalanced.

A MIRROR IN THE 12TH HOUSE

How does the separation from a child or a partner show in the natal chart? Look at the charts of John and Angelina. It is a sort of mirroring:

So there is more than one reason why these two do not communicate. And there probably are even more...Here I only mentioned what immediately crossed my mind.