ASTROLOGY CHART OF DOUGLAS MACARTHUR
and the secret mistake in Korea 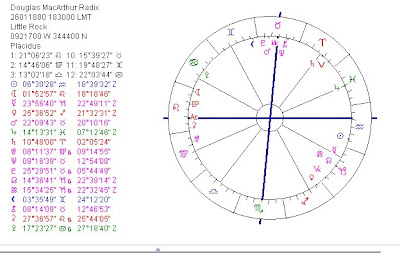 The name of General Douglas MacArthur, born 26th January 1880 in Little Rock, at 18h30 (source: Astrotheme) was mentioned in the article in the Washington Post that revealed a hidden mass murder in Korea. In a few weeks time probably 100.000 or more South Koreans were murdered because of (supposedly) sympathy for the communist. It were Koreans who committed the war crimes. The USA army did not do anything to stop the killing. And General MacArthur kept it a secret. Here are my observations. I see the role of Saturn-Ascendant (guilt and blame) and Neptune, the symbol of secrets...

SATURN-ASCENDANT
In 1950, in the progressed chart of MacArthur, we see Saturn opposition Ascendant. Today, transit Neptune (symbol of media, scandals and secrets) is close to the Descendant.l And we see another interaction of Saturn and Ascendant. Transit Saturn square progressed Ascendant, within a degree. (Yes, transits with progressions are most of the time very accurate!). 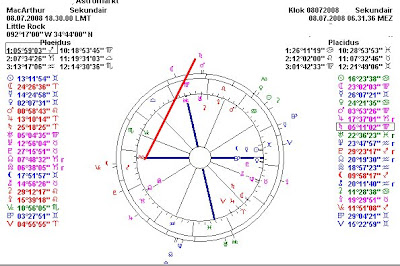 Saturn-Ascendant is the combination of blame, guilt and being blamed (of separations, divorces, too). Saturn is also there with the Ascendant at a time that a person does not do a thing, while he/she should. George W. Bush had transit Saturn conjunct Ascendant when he did not go to New Orleans… and when the government failed to help the people in that city after Katrina.

REPEATED COMBINATIONS
In the chart of Ingrid Betancourt Mars, Jupiter, Saturn and Uranus are prominent and they were all activated on the day of her libetation.

I have seen many examples of how a certain combination of planets comes back or is being activated at the time that there is a public reference to an event that occurred during the same combination of planets. Or at the time of an important issue in life, when the prominent planets or the tightest aspect is being sort of highlighted by transit or progression. Some more examples?

1. Stanley Tookie Williams
He had in his birth chart Mars/Pluto related to Saturn/Pluto, Mars tightly conjunct Saturn in Scorpio. On the day of the announcement of his execution he had transit Pluto semi square Mars/Saturn. When he was executed :Mars opposition Saturn

2. Croatia: Ante Gotovina.
He was arrested for war crimes December 8, 2005 and born October 12, 1955. During the war he had Progressed Sun square Pluto. At the time of his arrest he has Solar Arc Pluto conjunct Sun. And in his birth chart you see Sun septile Pluto. A sort of a vicious circle.

3. Poland: Irena Sendler
She was born February 15, 1910 in Warsaw, decorated October 10, 2003 for saving 2500 Jewish children. She died May 12, 2008.
In her birth chart we see Sun trine Pluto. Progressed Sun was square Pluto in the year of the occupation of her country (1939). She started her activities, because of a confrontation with 'life and death’ (Pluto). 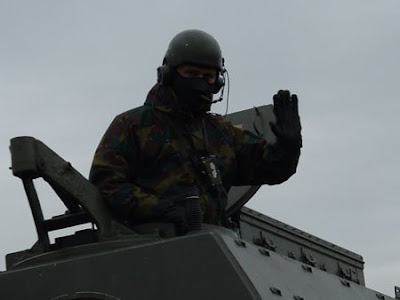 DOUGLAS MACARTHUR's BIRTH CHART
Back to the general and his chart and back to the topic.

In his birth chart we see Mars on top, square Ascendant and is not that typical for an army man? Maybe we should also have a better look at the fact that on the other side of the meridian there is Neptune and...MC = Mars/Neptune. Also notice Sun square Neptune (for being overly idealistic, discrete and secretive?). It is as if we already could read the importance of war and silence for his name and reputation.