In 2008 (see internet) most of the sites gave 21:15 for the hour of birth of Sonia Gandhi and so did my computer program. Now Astrodatabank mentions an AA rating for 21:30 (BC in hand VIA …) So, to be complete and to avoid wrong transits and progressions, I left out the text about T&P's and included that Astrodatabank chart too. It doesn't change the earlier text about her chart, but as it is been 5 years… Now I would like to add that the vital position of Jupiter refers to the international that she is (born in Italy, VIP in India). I also like to add that she and her husband had Mars square Mars (fire!). 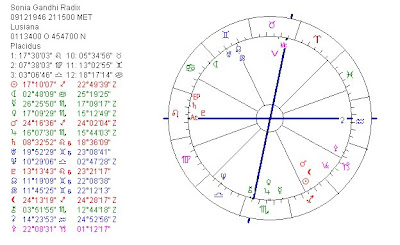 I had a special request to have a look at the chart of Sonia Gandhi, born Edvige Antonia Albina Maino. She is among the Time 100 most influential people, the widow of the former Prime Minister of India (Rajiv Gandhi) and the President of the Indian National Congress. Her chart is as impressive as her CV.

On either side of the horizon you see Pluto (end dispositor of the MC) and Ceres. Pluto for the political ambitions and Ceres for heirdoom (the inheretance, the dynasty).

Very important is the planet of writing and speaking: Mercury. Mercury is calling and rising before the Sun: she has written books and she was studying English in Cambridge when she met her husband. Mercury is the symbol of communications. Look at Jupiter square the Ascendant for the international! She was born in Italy and is a leader in India.

She also has a calling Moon for the needs, the family affairs and the 'involvement' at any possible level. Moon, Jupiter, Mercury and Pluto are prominent and the combination of them tells us that she is an influencial, succesful and popular speaker.

WIDOW OF THE GANDHI DYNASTY
She is the widow of an assassinated PM and that is important for her position in Indian politics. See Mars sesquisquare Saturn and Sun opposition Uranus...In the charts of most women they would indicate divorce or more than one marriage. Gandhi however should certainly not benefit from another marriage, that would change her public involvement with the Gandhi dynasty through her name.

Her details of birth is wrong. hence all these observations are incorrect

Thanks for your comment. I checked Astrodatabank and indeed: they mention a quarter of an hour later. That makes an important difference for transits and progressions with AC, MC and Moon.
However, not all to the observations are incorrect (see the update http://astropost.blogspot.nl/2008/07/astrology-chart-of-sonia-gandhi.html )