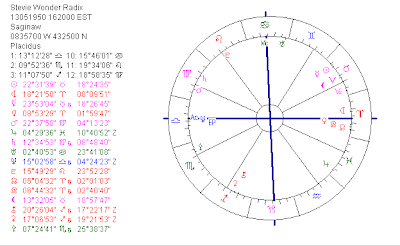 The natal chart of Stevie Wonder (born 13th May 1950 at 16h20 EST in Saginaw) is a good example of the value of crucial placements. Look at his chart.

Singers often have a combination of Venus and Uranus and or Neptune in their charts. Venus in THIS chart is right in the middle of an out of orb square with Uranus (6d13 orb) and an opposition with Neptunue (6d7 orb). So there is a very tight midpoint combination of Venus sesquisquare Uranus/Neptune. Also, Sun is conjunct the midpoint of Venus/Uranus.

He was very young when he started his carreer (12). In 1962 the progressed Sun was square Jupiter and quintile Pluto. The importance of Jupiter and Pluto being 'hit' by progressed Sun or MC in order to be succesful, is also visible in the birth and progressed chart of Bill 'Microsoft Gates.

And...how about the midpoint yod created by the Ascendant, Moon/Venus and Sun/Jupiter?


PRODUCING
Stevie Wonder has the Sun tightly trine Mars. I think that is a great symbol for being a producer. Also Mars is the end dispositor of the Midheaven (through Cancer, Moon Aries...etc.).
Geplaatst door Astromarkt op 5:59 PM