BIRTH CHART LINDSAY LOHAN
And the suspicion of robbery 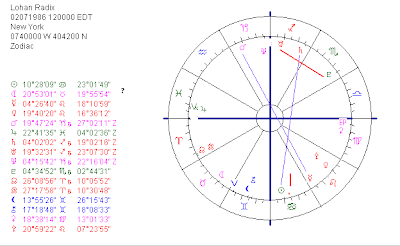 Mercury and Mars in a difficult distance from each other seems to be one of the indications for possible stealing (being quick - Mars - at hand - Mercury -...).*) A quindecile (165 degree aspect) is an indication for an obsession. Obsessive taking of other persons' property might be (in certain circumstances!)the meaning of Mercury quindecile Mars. And Lindsay Lohan has it. Two people say that she stole clothes on two different occasions (a fur coat and clothes out of a closet). Does it mean she did it? No, it says that the theme is part of her life time experiences.

Lindsay Lohan has Mercury 165 Mars AND other afflictions with Mercury. Mercury is inconjunct Neptune, sesquisquare Uranus and square Pluto. These are difficult aspects for the mind. Uranus is also semisquare Pluto and this combination sometimes points at an arrest and with Mercury often to an overly stressed mind...

Also on her day of birth Sun was biquintile Saturn and 160 d from Uranus (the theme of limited freedom). She has a calling Sun (no major aspects in sign) for drawing attention. And with Saturn she might be very creative (biquintile) to draw attention the wrong way. Notice that she has a prominent Moon in the sign of 'to have': Taurus...Her Moon is rising before the Sun (oriental).
All of this: mental problems, need to gather material things (Moon in Taurus) coming first, and the will to draw attention somehow...shows that the life of a star sometimes highlights the darker side of the moon.

STRESSY ASPECTS
With transit Pluto inconjunct her progressed Sun right now together with Solar Arc Pluto sesquisquare Sun and Solar Arc Uranus opposition Sun...an arrest is in the air this way or a mental breakdown. Rapid changes in her life have not made it easy to be balanced. So maybe she could better consult a therapist (who is also symbolised by Pluto). Hopefully the birth chart shows crucial positions of more pleasant planets...

ACTRICE AND SINGER
She is in the news as a suspect, but, she is famous for being an actrice and a singer. Her Venus is tightly trine Uranus. It is the strongest major aspect in this chart. Many modern artist have an aspect between Venus and Uranus. So has Lohan.

*) Mercury with Mars is also pointing at discussions or working communicating and selling.