BIRTH CHART CYNTHIA NIXON
Her times are challenging and changing... 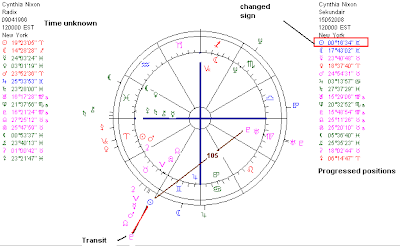 Cynthia Nixon's progressed Sun is changing sign. That might point at another way of living. Her progressed Venus is conjunct natal Sun, while transit Pluto is inconjunct progressed Sun. And the progressed Sun is involved in a 105 degree quindecile with Pluto. Maybe time to be spotted with her (female) partner, activist Christine Marinoni? But, it was no secret that Cynthia Nixon separated the father of her two children in 2005, to start living with Christine (though it must have been a secret for the Daily Mail:). Nevertheless it appears to be a time full of changes and challenges for Cynthia Nixon. Or should we read this the other way around, like this:

Spotlight on (Sun) questions of love (Venus) and sex (Pluto) or the choices you make in that field...
(Note that Jody Foster now has Venus semi square Sun and that the spotlight is on her lovelife right now, too.)

Two years ago, Cynthia Nixon was diagnosed for breast cancer. Pluto is typical astrological company when it comes to cutting away what is dangerous and having to make a fresh start again later. Two years ago she had progressed Venus inconjunct Pluto and now a combination leading to Venus and Pluto. Venus and Pluto is not only the financial axis. Venus and Pluto also refer to what you consider valuable. The combination of Venus and Pluto intensifies sympathies and antipathies and sometimes restores relations. It also could change the idea of what is really nice, lovely or beautiful. Sometimes it makes you buy an awful lot, too:)