BIRTH CHART OF ISRAEL:
at the 60st birthday of the nation 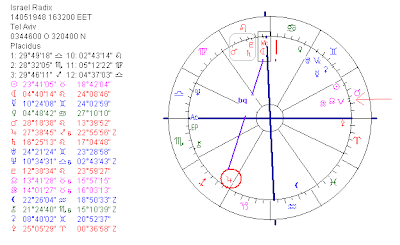 The festivities to celebrate the 60st birth day of the nation of Israel have started. Here you see the birth chart of Israel, 14th May 1948 at 16:32 (the moment when 'Israel is born'). Astrodatabank uses 16:37. The difficulty with natal chart of nations is the time of birth. Was it when the meeting started, when the documents were signed, when all was completed? With ancient nations another difficulty rises. Was the nation born the first time, when it became a republic, when it turned into a kingdom again or when it was liberated after occupation?

PROSPERITY
In both charts (16:37 or 16:32) the Mooon is on top without major aspects. This calling crucial Moon is connected with Jupiter by a creative biquintile and Jupiter is oriental (the first planet or light rising before the Sun is the oriental planet, unless it is the very common Mercury or Venus, not prominent by crucial placement, being unaspected or by a link with Aries Point).
The nation, history, habits and environment are on top with an optimistic orientation. This nation 'goes for' growth, international contacts and succes. Israel is marked by a creative sense of progress. With 50% of the positions in fixed signs, this is the chart of a nation that is bound to go on.

DANGER
Watch Saturn, in between Mars and Pluto, in the 10th house. This could be read as 'disadvantages - Saturn - of political - Pluto - struggle - Mars'. Also there is the position of that strange spot, Vulcanus (violence), conjunct Northern Node (group) and square Pluto (threat). It is an intriguing message. Pluto square Northern Node is a sign for a nation or group that has to face the facts of life and death and has to deal with power, influence, politics...The nation was proclamed at a dangerous moment and Israel was born in a violent time. An important part of the world had been destroyed, damaged and turned upside down. That influence is the first problem that rises in this chart (as Vulcanus and the Northern Node are rising right before the Sun).

Olympic team murdered: in the solar chart of 1972 the MC is in between Sun and Vulcanus (public violence).

Yom Kippur: Jupiter square Ascendant (crucial spot at the bottom of the chart)

Mordechai Vanunu and the atomic bomb revelation (October 1986): progressed Sun had changed sign a year before and was at the time semi square Saturn.

The astrological timing of these events seem to point at 16:32.

SOLAR
The 60th birthdaychart of Israel has Mars conjunct the IC, if 16:32 is the right moment for the natal chart. Mars is conjunct the MC of that natal chart, too. Let us hope Mars does not manifest himself as 'attacks, war and battle'...or that 16:32 is not the right moment at all. ..But: 16:37 or 16:32...it does not make a difference as far as the Moon is concerned. The natal Moon is conjunct the Solar Return IC for both times. And thát shows that a change in position is coming up.