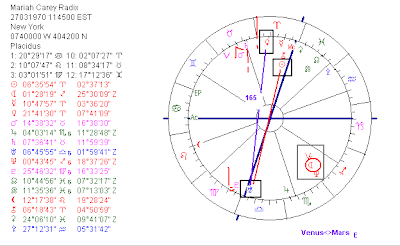 Mariah Carey (27th March 1970, 11h45 a.m. NY) is a born artist. Venus - for talents - is on top of her chart, in an obsessive quindecile of 165 degrees with Uranus and in mutual reception with the dispositor of the Midheaven (Mars). Venus-Uranus combinations are most of the time present in the charts of singers. The Moon is in the fifth house of performance and show, conjunct Neptune (the planet of arts).

She is also born to have difficult relationships. Sun opposition Uranus, Venus quindecile Uranus...Those are two of the 4 possible indications for divorce in a woman's chart. Also notice Venus in Aries...that is the place Venus does not really like to be!

But still, today, we hear that she is engaged to get married again, to rapper Nick Cannon. We see progressed Moon opposition Jupiter right now and in her solar return for this year Venus and Uranus both sit on the descendant as a statement for new love.

PS dated May 7th: the 'engagement ring' seems to have been a (unexpected, sudden = Uranus) wedding ring instead.