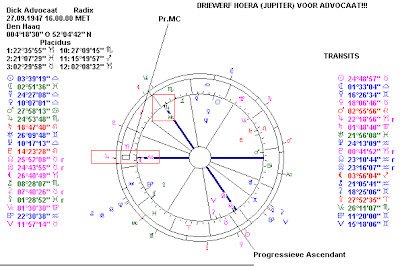 It is a party for trainer/coach Dick Advocaat. At his 60st he managed to win the UEFA-cup with Zenit Saint Petersburg! This victory could have been predicted by any astrologer There are four (4!!!!) fortunate aspects with Jupiter.
1. Transit Jupiter tightly conjunct his Ascendant
2. It was a solar transit - Jupiter and Venus day, a day for a celebration (transit Sun opposition Jupiter and sesquisquare Venus)
3. Transit Jupiter is trine his progressed Ascendant
4. Transit Jupiter is conjunct progressed Midheaven
And all of this within 1 degree of orb! Yes, I believe that it takes tight orbs...:)

Earlier this year he had transit Saturn in affliction with progressed and natal Sun at the same time. That was when he was suspended for his behaviour during one of the UEFA-games. You see the chart of that moment here below. Soon (in June and July) the Saturn transits will be repeated (as Saturn is retrograding) but not at the same time, like in March. 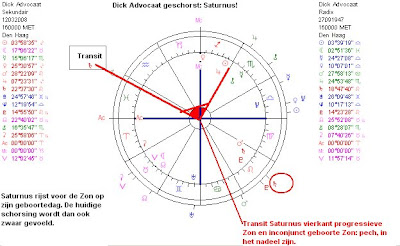 Dick Advocaat was born 27th September 1947 around 16 hours in The Hague (source: Astrolab).