BIRTH CHART DEMJANJUK
The Saturn-Pluto effect and the small trine 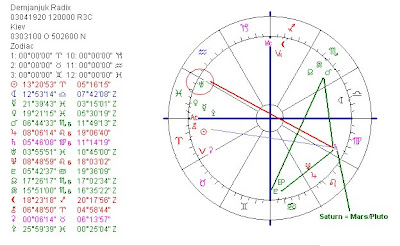 Demjanjuk, born 3rd April 1920 in Kiev, has to leave the USA and go back to where he came from, if they want him. On May 19, 2008 the U. S. Supreme Court denied Demjanjuk's petition for certiorari, declining to hear his case against the deportation order.

The 88 year old is suspected to be a war criminal in Treblinka (but their are doubts about his identity). Transit Neptune sesquisquare progressed Sun (a frustrating disappointment) and transit Mars inconjunct progressed Uranus (for sudden attack) accompany the message that he will be expelled.(But still, IS the man that they send away the man with this chart?)

SATURN AND PLUTO: THE COMEBACK OF GUILT AND PUNISHMENT
At his first trial in 2005/2006 progressed Sun was conjunct progressed Pluto and sextile Saturn. The Saturn-Pluto combination for hard confrontations... It changed his life and endagered it, but... he is a die hard!

During the war Demjanjuk had progressed Sun trine Pluto and sextile Saturn, with transit Saturn conjunct progressed Sun and transit Pluto square progressed Sun. The Saturn-Pluto combinations sometimes includes having to pay later...
In 1988 Israel condommed him to death, but later in 1993 there was not enough evidence and he was released. On April 30, 2004 a judge in Ohio found him guilty again.*)On December 21, 2006 this happened again and now it it time to go.

On his birthday 50% of the placements were in watersign. Uranus is the oriental planet (so he probably will get old and he already is). Saturn is opposition Uranus (the theme of limited freedom) and biquintile Sun (a creative way to lengthen life...he had been convicted 20 years ago!). There is a threefold midpoint combination of Mars, Saturn and Pluto in the birth chart of Demjanjuk. This combination points at the theme of violent or unnatural death, 3 times. Notice that Saturn and Pluto are part of this dangerous combination.

So in this case, Demjanjuk did everything to get things done his way during his time in Treblinka, where he abused, killed and was feared (or in his eyes, respected) because of it. He could get away with it for a long long time. And that is the effect of the small trine.

Again, I very much doubt that trines and sextiles point at good characteristics and squares and oppositions at bad ones. The fact that inmates have a lot of harmonious aspects (as an investigation showed) proofs that some of us choose for the easy way out. Anyway...It was very easy to impress prisoners in Treblinka.