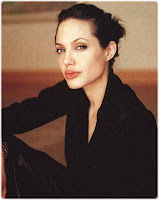 Angelina Jolie is expecting a twin. She is considered to be one of the most beautiful women in the world. Her chart (June 4, 1975, 9:09 a.m.Los Angeles) shows that. 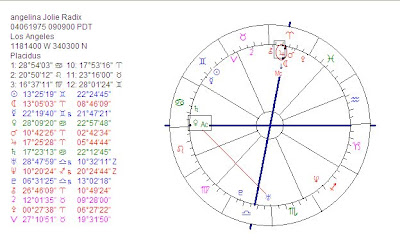 Look at Venus tightly conjunct the Ascendant in the feminine sign of Cancer (Venus rising out of the sea, it reminds one of the classical interpretation of how Venus was born). Venus and Ascendant are both square Uranus, the planet that is crucially placed on the lowest spot of this chart. Notice how Jupiter ruler 5 (house of children and entertainment) is conjunct her MC and Moon*). The Moon is positioned rigth in between Mars and Jupiter. See Mars ruler 10 trine Neptune for activism and being active in harmony with the field of arts, idealism, religion and/or...movies. Her Astro I.D.has Venus and Jupiter, Moon and Uranus prominent. Jupiter is most prominent of them all. It refers to travelling! Angelina and Brad are in France now and her daughter Shilo was born in Namibia. In between they were in India. They are travelling around the world!

*) Jupiter is on the descendant of her solar return chart for this year.

WITH BRAD PITT
I hope for the sake of the children that my observations of the synergie between Angelina and Brad might be interpreted other than my way. I see Sunsings that do not match, Moonsigns conflicting, Venus opposition Venus, and tightly Mars square Mars (with the Jupiter of Brad conjunct her Mars). Also, his Pluto is square her Sun.
This shows attraction and competition. I have several examples on this blog of the way Mars in conflict with Mars ended up in fighting each other in court. 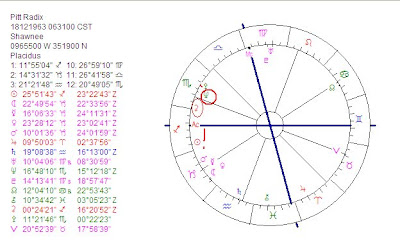 BRAD PITT
Brad has the following prominent placements and aspects:
- Sun without major aspects in sign (calling); for the star or the leader (square the Midheaven with end dispositor Mercury = communications)
- Tightest aspect: Mars trine Uranus; for exceptional energy and drive to be free
- Venus sesquisquare Uranus; maybe he can sing? It might also refer to exciting women
- Biquintile Jupiter-Neptune; fans or followers!
- Uranus on top of the chart; the opposite of Angelina's Uranus...wanting to make the world a better place
- Neptune rising before the Sun and sesquisquare Zero Aries; an artist or idealist first of all or ... an illusion, like moviestars are:), sextile Mercury (for being good at telling tales)
- a 'cool' Venus and Moon in Capricorn, just like some of the James Bonds.

With his Sagittarius Ascendant and Sun, he might not be too unwilling to travel around, too.

Brad Pitt doesnot have as much indications for a divorce as Angelina has, but still: he did have a divorce. Notice that Venus is conjunst Sun/Saturn and semi square Saturn/MC.

Earlier message: 27th May 2006, when SHILOH NOUVEL JOLIE-PITT was born:
"Saturday night in a rather unpopulated part of Namibia, the daughter of Brad Pitt (18th December 1963, 6h31 in Shawnee) and Angelina Jolie (4th of June 1975, 09h09m in LA) was born, Shiloh Nouvel Jolie-Pitt. Nice to see that the positions in her birth chart correlate with the charts of her parents.

Her Venus squares her mothers Venus conjunct Ascendant and her Mars is close to that position..

Her Pluto is conjunct her fathers’ Sun

From this we read joy and happiness and (likewise Tom Cruise, who had Pluto on the IC when his baby was born the 22nd of last April), the father is very impressed. "

May I add, that Pluto represents the events that make the difference between life and death (such as giving birth and dying)?
Geplaatst door Astromarkt op 3:49 PM