BIRTH CHART EDWARD KENNEDY
who has been rushed to hospital today 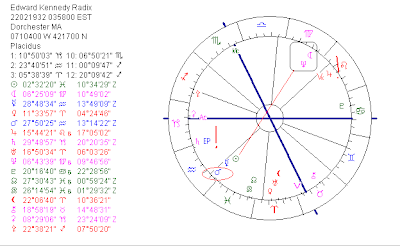 Edward Kennedy has been transported to hospital quickly today with transit Saturn opposition Sun and sesquisquare Uranus *)(tightly) and a tight semisquare of Pluto and Neptune in the progressed chart, where Pluto is close to the IC. I hope for him that there will be no brain damage that causes a sort of an 'imprisonment' in the mind.

Edward Kennedy was born 22nd of February 1932 at 3h58 a.m. EST in Dorchester MA, USA. Mars is oriental in his chart, Jupiter is sesquisquare Aries Point, Saturn does not make major aspects in sign (so Saturn for government is 'calling'!) and Uranus is end dispositor of the MC.

Edward Kennedy never could reach the top because of the Chappaquiddick-incident. He got a probational punishment for leaving the scene of an accident (and Mary Jo Kopechne), maybe because he drank too much. That was on July 19, 1969, with Mars square Sun and sesquisquare Uranus, Uranus semisquare Jupiter and Neptune semi square Ascenant. Also transit Chiron was inconjunct his natal MC, transit Ceres was square that MC. The progressed Moon was close to Saturn. With Mars, Jupiter and Saturn prominent you can easily see the rise (Jupiter) and fall (Saturn). The MC is conjunct the midpoint Jupiter/Saturn.

In his natal chart you can see the desillusion. Notice Sun opposition Neptune and {Neptune conjunct Moon} sextile MC. The tightest aspect is Moon conjunct Neptune (not benificiary for staying married and probably pointing at addiction).

POST SCRIPTUM REPORT:
No damage, it seems Edward Kennedy had a small heart attack. And that shows that Saturn and Pluto transits and progressions do not necessarily harm or kill, unless ruler 8 and the eight house are involved. Of course it depends on being a VIP, too, the country you live in etcetera. Could we read this as a blockade (Saturn and Uranus) of the bloodcirculation (Sun)? But, with Saturn opposition Sun and the Midheaven close to an opposition with Pluto Edward Kennedy should be very careful.

*) 13/14 October 2007 Edward Kennedy had transit Saturn inconjunct Uranus (now sesquisquare). In October 2007 he had surgery to end a blockade...

ANOTHER PS dated May 22, 2008
I suddenly remember that my father had Progressed Saturn inconjunct Uranus in the year that he suffered from several heart attacks that finally (of course with other progressions and transits, too) ended his life.