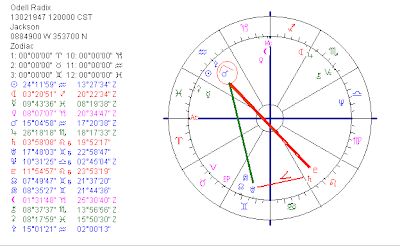 Dianne Odell lived in an iron long for 58 years, since age 3 and managed to write a book and to complete highschool. Read about it ...

But failure of electricity stopped the machine that kept her alive and now she died. There are 4 significant aspects on her dying day.

Transit Neptune was conjunct her Sun (weakness; I read that lately she was less healthy and weaker) and transit Pluto semi square Mars (using force), transit Pluto conjunct progressed Mars (using force; a challenge for energy) and transit Saturn inconjunct progressed Mars (death, end of energy...).
You see the Mars-Saturn-Pluto combination for unnatural death. Interesting, considering the fact that she had an unnatural life.

Without an hour of birth there is of course no complete idea about the astrological indications for the way she had to live. We need the position of the Ascendant and MC to find astrological conditions and circumstances.

But there are some clues in the positions on her day of birth (Februay 13, 1947).
We see for example Saturn semi square Uranus for limited freedom, with Sun and Jupiter sesquisquare the midpoint Saturn/Uranus. Sun square Jupiter and sesquisquare Neptune might point at being religious or an idol. She was rather well known. Her Astro I.D. shows Mars semi square Aries Point and oriental. Mars is the symbol or iron., as it happens. It is also the symbol of drive, energy, muscles... And I like to point at the positionn of Pallas, symbol of wisdom, conjunct Mars.

Look at the chart and see how amazingly Mars, Saturn and Pluto are related to the symbol of electricity, Uranus, through Mars, the most prominent planet in her chart. BTW the midpoint Sun/Saturn is in line with the midpoint Mars/Pluto.