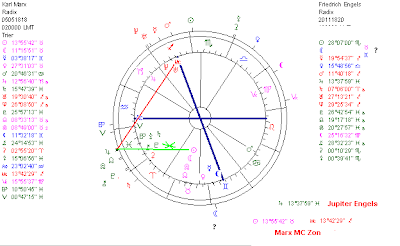 Karl Marx founded ...marxism (communism). He wrote 'Das Kapital' and the 'Communist Manifest. He is supposed to be born at night, at 2 a.m. on the 5th May 1818 in the German town Trier. He has the Moon oriental in the material sign of Taurus. Both Mercury and Venus are calling in his chart and Uranus is close to the Midheaven. Uranus is the symbol of the revolutionary (changing the world). This planet is inconjunct Mars and connected to the Sun in a creative biquintile. Marx was not a revolutionary person, he wrote about it...

Maybe it is nice to point at Saturn in the first house (the planet that hase the first contact with the ascendant on the day he was born). Saturn is the planet of the earth signs and symbolises conservatism, ambition and material things. It is not so strange that the battle of the classes had his interest. With Saturn conjunct the Midheaven he must have sensed and experienced the limitations (Saturn) of his position (MC). In fact, he had to be supported with money coming from Friedrich Engels.

Engels, Jupiter of Marx
Engels was born 28 November 1820. As it happens (...) with his Jupiter in a tight sextile with the natal Sun and square the Midheaven of Marx! Jupiter symbolises a.o. the coach and support. Notice that with Jupiter sextile and Neptune sesquisquare the Sun of Marx in synergie there is the combination of the fan or supporter (the believer).