URANUS AND ACCIDENTS
Sad example of a tragedy 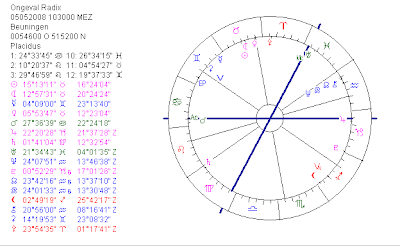 Very serious accidents often happen with Mars and Uranus on a crucial spot in the chart of the event (on the time and place of th accident). This morning in The Netherlands at about 10.30 a.m. a van hit the back side of a ridingn caravan and a little later the gass in the caravan exploded, setting the car on fire. The parents (stuck in the car) and the two little children inside died. They could not be saved by other drivers, because of the heat.

Of course, at any moent there can be an accident, a crash or an explosion, but some moments in time and place are more critical. Uranus was on the MC of the crashing ice hall in Germany at the time. Uranus was on the MC when the atomic bomb destroyed Hiroshima and at the time of an explision in Tel Aviv. The disaster in Bhopal occurred on December 3, 1984, just after midnight and you see Uranus near the IC.

Uranus op het MC of aan top in de geboortehoroscoop
Uranus on the MC in the birth charts of people often 'cause' news, shriek, people talking, changes at any level. For example: Karl Marx, Gerard Reve (Dutch homosexual author once on trial for blasphemia) and Dutch princess Margarita (who has Uranus square Ascendant, on top) who accused her aunt the Queen of actions against her ex-husband at the time.

Uranus on the MC or on top (square Ascendant) in progression or transit
Everything that happens and that is shocking (at any possible level or degree) has to do with Uranus. Transit Uranus conjunct the MC is most of the time repeating itself and signifies a hectic period in a changing life. The progressed MC conjunct Uranus is sometimes related to a the position of an outcast (liberating yourself from the past and the family destiny). And that, too, might not happen without tumultuous or even embarassing events.

RELEVANT:
Accidents and the study done by Carter.