WHY HILLARY CANNOT GIVE UP
It is because of the fixed signs in her birth chart...

Hillary Clinton won in West Virginia and she won't give up. This determination is not surprising. She has 60% of her placements in fixed signs (in her case in Scorpio or Leo). Sun, Mercury, Venus, Mars, Saturn and Pluto are in fixed signs. And now that we are looking at qualities and elements: she does not have any placement in an earth sign! It points at the need to gather material things, security, certainty. For more info...

And if she was born at 8 p.m. (a time of birth that is not certain any more) Saturn would be in her second house (the disadvantages of and separation from earnings and belongings). I read that she spent a lot of her own money (millions!) for her campaign.

SATURN
Saturn is an important planet and even more in the birth charts of those who do not have a placement in an earth sign. Saturn represents material and solid things. If Hillary Clinton is born at 8 p.m. Saturn is close to her IC, opposition MC and she will give up in the first half of July. In that case, Saturn was opposition MC in October 2007 and in February 2008, too. In fact, transit Saturn would be oppositon MC again and again. If this is her hour of birth, it is obvious that she will be defeated in the end and that it cost her a lot of money (Saturn in the equal 2nd house).

Also, Saturn is square Mercury and Mercury is supposed to be ruling the first house in the 8 p.m. chart. Saturn is disposing of the 8th house! It is an unfortunate and very tight aspect.

WHERE IS THE FORTUNE?
All this said, Hillary Clinton has already had her part of the cake. She has been living in the White House, she is a potential president and she has many supporters. I can see that 8 a.m. might be a possible birth time, too (Pluto ruler 1 on top, for example). But that places Mercury ruler 8 on the Ascendant and transit Saturn would be close to the Midheaven for the 3rd time.

GUESS...
The birth chart of Hillary Clinton should represent her position and her brilliant carreer as a wife and as a woman. She made it, even if she loses this fight and a lot of money. How many women in the world did what she did? So....I'd love to see her have a chart with Mars and Pluto on top, Saturn conjunct MC and Venus (ruler 7th house) on the Ascendant, a 7h15 a.m. chart, with transit Jupiter right now inconjunct her Midheaven (for winning with certain doubts and consequences). Pluto would be conjunct her progressed Ascendant rigth now, representing the political struggle. It looks like the chart here below and it is only an astrologers' dream. 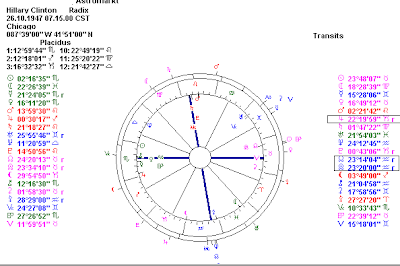