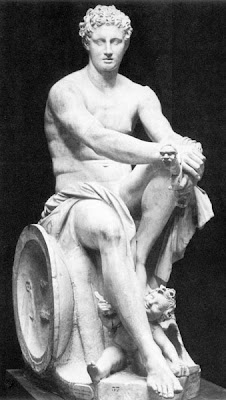 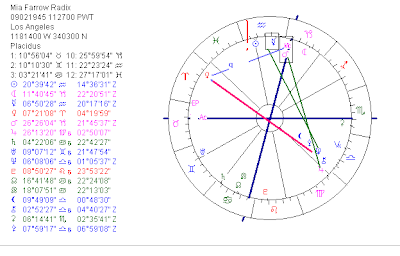 Have you always wondered about Mars, symbol of war, agression, action and enterprise, conjunct the Midheaven in the birth chart of Mia Farrow? It took some time, but now she is what she 'should' be: an activist! She was on CNN talking about China's ties to Sudan (awful civil war). She has been in Dafur a couple of times (see: www.miafarrow.org), f.ex. in November 2004, with transit Saturn opposition MC.

Mia Farrow also has a calling Sun (not making major aspects) high up in her chart in the 10th house. It is the symbol of the leader, star or performer: someone drawing attention. Notice that the tightest aspect in her chart is Jupiter is trine Mars and Midheaven... and that Jupiter is biquintile Sun: that is a sign for succes and a creative way to 'advance'.

She had another job first. Mercury is on top of her chart (so Mercury in this case is the oriental planet), trine Neptune. Talking or writing in an easy connection to fantasy, vision and pretending. It fits an actrice. So does the opposition of Venus and Neptune. As Venus is quintile the MC, charm, beauty and talents are creatively linked to her carreer. Venus is also connected to the midpoint Sun/Moon (in the 22.5 range) and that means: an artist in heart and soul.

Mia Farrow divorced Woody Allen. For divorce we find hardly any of the basic clues in her chart*), although there is Venus in Aries again...I see this placement as a bad sign for relationships (see other examples on this blog). The Moon in conflict with Venus is a good sign for sense for arts and beauty, but is not the most easy aspect for being a mother and a wife at the same time.

Saturn and Neptune are connected to Sun and Venus (Sun sesquisquare Saturn and Neptune; Venus square Saturn and opposition Neptune). Saturn is square Neptune. The Moon is square Venus and Neptune and opposition Saturn (wide orbs, but there is 'translation of light'). Maybe this could be read as: heavy (Saturn) disappointment (Neptune) in love (Venus)and familie life(Sun)? Her ex is Woody Allen (December 1, 1935, 22h55, Bronx, Saturn on descendant square Mercury ruler 1). He is now married to their foster child! It is, BTW, good to see that this couple, that fought each other in court, has Mars conjunct Mars in synergy. Look at the labels on the left and find more examples of couples with Mars - Mars; couples that eventually ended up in fighting each other.

*)In the chart of a female the usual components for a divorce or not being/getting married are one or more of the following combinations: Sun-Uranus, Venus-Uranus, Sun-Mars or Mars-Saturn in conflict or conflicts between the 1st and 7th house. Artists and rich persons need fewer indications to break up.