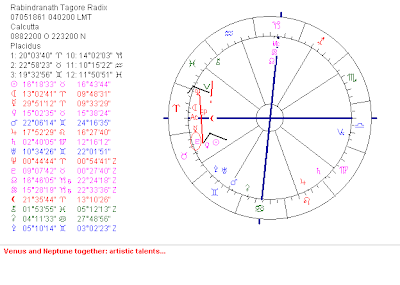 I know nothing about Rabindranath Tagore, born 7th May 1861 at 4:02 LMT in Calcutta. He was in my database and the subtitle was: philosopher and a poet. In his birth chart, using the Astro I.D. method, I can see thát, easily, though I use western astrology. As Astro I.D. uses the positions and prominences of planets and the distances between them, rather than houses and signs, Astro I.D. is an international method!:)

Look at Sun conjunct Venus, both prominent (as they are semi square Aries Point). Look at Neptune, calling, on Aries Point!^ Twice prominent...Neptune is semi square Venus. And look at Mercury <> (Mutual reception) Mars, the end dispositors of the MC! Here we already have it all:
- a call for arts at any possible level
- a life together with estetics
- discussions, techniques

Pluto is oriental. I wondered what the meaning of Pluto here was, as Pluto is the symbol of life and death, politics, influence, prizes (and the price to pay) and power, etc.
I searched for it on Wikipedia. There I found that he also had political significance and was the first person born in India who won a Nobel Prize.