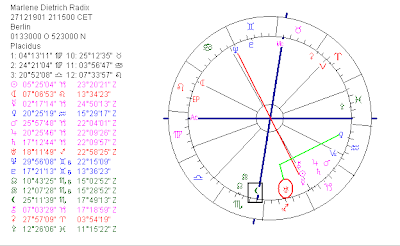 Marlene Dietrich was born 27th December 1901 in Berlin at 21h15 CET and is reborn again in wax in Berlin this week. The lady who was oriented at love from her feet to her head (bin von Kopf biss Fuss auf Liebe eingestelt) had Uranus rising before the Sun. In my book Astro I.D. I give more examples of people with Uranus oriental, who became very old. Marlene died May 6, 1992, age 91. When WWII started in 1939 she moved to London.

SHOWBIZZ
Marlene was showbizz and maybe that is the reason why we find Saturn, end dispositor of the MC, in the fifth (Leo) house of shows and strong in sign? I like to point at Mars, tightly trine the Midheaven, also in the 5th house.

LOVELIFE
Marlene had a husband (and a daughter) and she also had a lot of affairs, a.o. with the Spanish writer Mercedes de Accosta. She was a lesbian and a vamp, a controversial combination that is shown in the controversy of Sun opposition Neptune, the most prominent planets.

BTW Her husband lived with a mistress. Her Venus is in Aquarius sextile Uranus to demonstrate 'free love'. And artistic qualities...Because lots of singers (and she sang, too) have Venus related to Uranus.

ASTRO I.D.
Marlene had a 'calling' Sun (not making major aspects in sign or within orb 5 degrees), with an out of sign opposition with Neptune, prominently placed square Aries Point. As you may have read in the article about Fritzl, Sun-Neptune afflictions tend to 'produce' double lifes, one of them fake. But as she was an actrice, it is obvious that she was not really the woman she appeared to be. She was a true media star who knew how to draw attention and to keep things a secret, meanwhile. Even her wax image is not as real as it looks like:)