BIRTH CHART OF THE REPUBLICANS GEORGE W. BUSH AND JOHN MCCAIN
the popularity polls for Bush and how about the elections?

Never before an American president has been THIS impopular: 71 percent of the Americans is not happy with the way that George W. Bush does the job! 'Only' 66 percent was not satisfied with Richard Nixon. See the message of CNN. Lucky for them, he is about to make place for his successor. I think Saturn square his MC indicates this decay and Transit Saturn conjunct Ascendant (with Katrina) rushed the way down in the popularity polls. Will this impopularity damage the position of John McCain? I think McCain has the astrological prophile of a possible president and on the 6th of November he might win the elections. But I don't have the proper MC of Clinton and Obama, so maybe they have even better prospects. Though, those of McCain are rather good. Here you find the quick reading of the charts of Bush and McCain.

Here is the birth chart of George W. Bush: 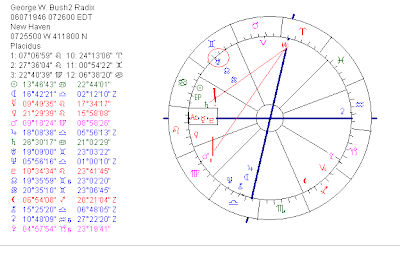 George W. Bush was born 6 July, 1946, at 7:26 a.m. in New Haven CN, USA. Mercury and Pluto are on a crucial spot in his chart and Saturn is calling. Saturn is conjunct the midpoints Sun/Mercury and Sun/Pluto. This combination of a prominent Mercury, Saturn and Pluto with Moon conjunct Jupiter and sextile Venus is in line with what I found in the charts of other presidents (the midpoint combination of Mercury, Saturn and Pluto with Moon-Venus). It takes a political mind (or should I say, a 'die hard' mentality) and charm or popularity to become an elected president.

George W. Bush has an astrological profile of:
- Mercury crucial
- Pluto crucial
- Saturn calling
- Uranus oriental
- Mars calling
The combination of Mercury, Pluto and Saturn has been explained above. There are other possible combinations of prominent placements: Mars, Uranus and Pluto (acting on impulse). I think THAT combination with Mars, Saturn and Pluto (the theme of unnatural death and hard political struggles*).All in all his Astro I.D. says communicating and politics are crucial, management and administrations are calling and so is enterprise. That with 'changing the world' as an orientation.

BIRTH CHART MC WITH MARS AND SATURN
His Midheaven in Aries has the Sun as end dispositor (leading) and ruler MC Mars is sesquisquare the MC. The square of MC with Saturn lead to administration. So this MC is connected with the prominent planets Mars and Saturn. Maybe that alone shows a prominent place in society ahead.

LOST OF POPULARITY
He was a president and he was elected again, but with a minor majority. But how did he loose most of the popularity that he had (in astrological terms)? I think Saturn square MC might be blamed for that. In my article on Astromarkt about Saturn in the 10th house I wrote:

"Maybe Saturn in a house indicates that things the house stands for may come to an end or lessen, like fame or your position. Thinking about charts of:
a. George W. Bush has an unaspected Saturn in Cancer in the 12th (good placement, though?), squaring his MC. Should this indicate a fall or political end due to illness? I think all presidents must end their job sometimes...."

"In Bill Clintons'case Saturn did not cause his fall.because of the good aspects. Saturn in the tenth in the charts of Napoleon and Hitler were afflicted. Saturn in the tenth might refer to the limitations of goals and to punishment if you go beyond your reach. And an embarrasment anyway! Like with Clinton and Uri Geller (the 'spoonbender' having Saturn in Leo in the tenth well aspected - he fell a few positions off the stairs but was not thrown before the lions or decapitated)."

After Katrina (when he had transit Saturn conjunct Ascendant) he could not manage to uplift his imago.

MARS SATURN RIGHT NOW
Today, with the poll in mind, transit Mars is conjunct George W. Bush's Saturn. With Katrina Saturn came over his Ascendant (being blamed, bad presentation) and since that moment Saturn passed his first house. Now Saturn is moving towards Mars, ruler 10, and Saturn will be conjunct Mars mid of August 2008. Maybe that is another poll:)

These transits activate the existing Mars-Saturn connection to the MC and show the disadvantages and failures (Saturn) of work (Mars) and position(MC).

ELECTION DAY
On the 6th of November we see:
Sun trine Sun (a day of being noticed)
Venus trine Venus (good feelings)
Jupiter square Jupiter (lots of support, maybe given)
Saturn square Uranus (change in status? or should this refer to the disadvantages - Saturn - of democracy - Uranus-?:)
Neptune opposition Venus (disappointment, or questions of wrong/false sympathies) 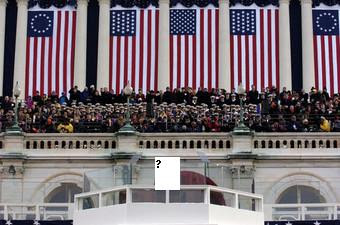 SUNARCS
At a certain point in life all birth positions are sextile the Sunarc position. That is so on the ... 16th of January 2009 for mr. Bush! It might be just coincidence but I bet it is not.

THE DAYS AFTER
Whatever happens on the 6th of November, George has got to go.
And what about after his presidency? He is 62 years old by then and can do a lot of precious speeches to make an income. He can do so for a long time. Uranus is the oriental planet in his chart. So he might get old. 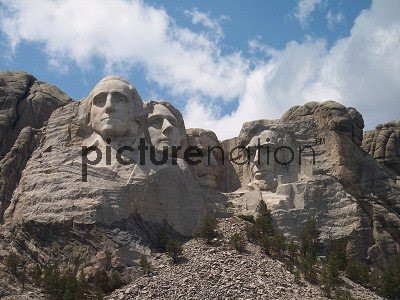 RELEVANT:
About the similarities between presidents...
Chart of Obama
Chart of Hillary Clinton
Calling planets
and of course the chart of John McCain here below 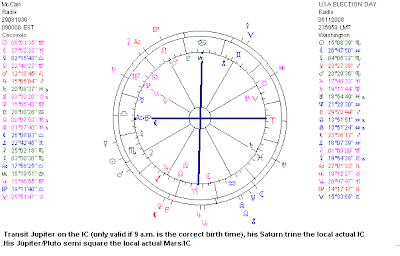 READING ASTRO I.D, DOING QUICK SCAN, LOOKING AT THE MC AND THE SPECIAL COMBINATIONS
1.Astro I.D.
Activist, enterprise, first of all a soldier (Mars oriental) with communication skills at any possible level (Mercury calling), but above all a politican or someone with influence, power or money (Pluto on top).
2. Quick scan of character
A realist, a materialist with fixed opinions and a charming way of presenting himself.
3. MC
Cancer is for keeping, caring for or conserving emotions, educating or environment and patriotic feelings. Management or administrations is linked to the job (Saturn) and faith or religion (Neptune and Jupiter) might go along with it or ...he has got fans.
4. Midpoints, yods
The yods point at unexpected succes and an independant opinion. That opinion however might be rather conservative, too. There is a lot of ambition. The Mars/Saturn/Pluto combination shows that he does not walk away from hard political confrontations. .

CONCLUSION
He is an ambitious realist with an original conservative message that he knows how to communicate.

RELEVANT:
More about McCain and Clinton in November
How about McCain for president? I guess McCain has better chances with his Progressed Midheaven sextile (progressed) Pluto and the Progressed conjunction of Jupiter and Ascendant. Of course, the MC and Ascendant of Hillary Clinton are unknown (20 hours does not seem to be right) and so are the MC and Ascendant of Barack Oboma. And do we really know the MC of McCain, I wonder? People were equally sure about Kerry's and Clinton's...Anyway, here below you see the transits with the progressed chart and above the transits with the birth chart, for 9.00 a.m. BTW: he is got Moon trine Venus and that completes the similarities of his chart with those of the former presidents and with George Bush. 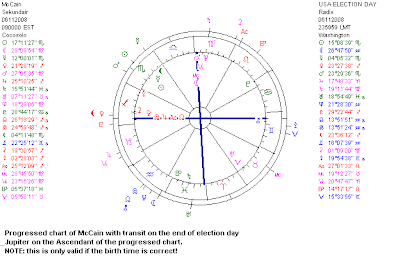