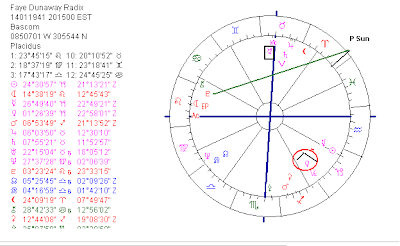 Dailymail shows the pictures of Faye Dunaway in 2005 and now and there is a hugh difference. As it happens...her progressed Sun changed sign in 2006 and earlier this year her progressed Sun was trine progressed Pluto. That explains the transformation as far as astrology is concerned:), but I noticed that in 2001 Faye Dunaway also looked spendlid...So what really changed? That we know that Faye Dunaway even alters her cheekbones and teeth when she is to be seen in public, I guess. This site: Cityrag says she is suffering from 'Madamism', a puppetlike look caused by too many facelifts. Still, that did not explain her looks in 2005 unless the photographer did his very best to make her look very old. But I found the reason why. Transit Saturn is opposition her natal Sun in 2005. And Saturn is for aging...:) The spotlight (Sun) was on her 'bad' side (Saturn)...

The Astro I.D. of Faye Dunaway:
1. Her most prominent planet is Venus. Venus is square Aries Point, end dispositor of the MC-routing and oriental. Beauty, charm and diplomacy come first in her life and determine her carreer. With Venus in the 5th house it is pretty obvious that show, performance and entertainment would be part of her profession.

2. She has a crucial Uranus on the Midheaven
I wondered what that Uranus is doing there. Uranus IS the planet of change and certain surgery. And maybe Uranus is on top to demonstrate the importance of it in her life? Venus AND Uranus are prominent in this chart. One of the definiations of Venus-Uranus is beauty surgery. It is no wonder that Venus-Uranus-combinations are frequent in the charts of f.ex. singers and popstars. Her Taurus MC conjunct Uranus is an alternitave statement for the same combination of Venus and Uranus.

It is not world news, but I think it is interesting to see how Venus-Uranus symbolises plastic surgery and how Saturn is strong enough to overrule the effect.