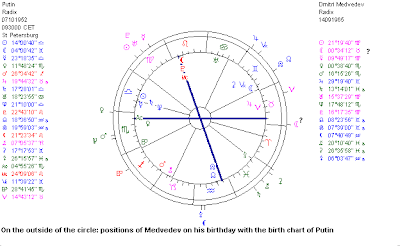 With transit Neptunus tightly (0.o orb) opposition Midheaven, president Putin became prime minister Putin today. Neptune is the planet of giving up and hiding away. But maybe, as Neptune is in his 12th house, he is in charge on the background. In his progressed chart the Midheaven is going to join progressed Neptune, and later, next year: progressed Saturn.

His successor, Dmitri Medvedev, has transit Uranus opposition Sun right now. Medvedev (14th September 1965) promisses changes and more freedom. He has Pluto oriental (for being a politician in the first place) and conjunct Uranus, both sextile Mars(for being somewhat impulsive and radical, forcing changes). Jupiter is square Aries Point for the international.